“From the first settlers who came to our shores, from the first American Indian families who befriended them, men and women have worked together to build this nation. Too often the women were unsung and sometimes their contributions went unnoticed. But the achievements, leadership, courage, strength and love of the women who built America was as vital as that of the men whose names we know so well.”

March marks the University of South Florida’s celebration of Women’s History Month and an opportunity to highlight the contributions of women throughout history and contemporary society. To commemorate USF’s legacy of accomplished women leaders and contributors, the  Office of Multicultural Affairs joins campus partners to host educational and celebratory events throughout the month.

The nation’s monthlong celebration of women’s history began as an outgrowth of a weeklong recognition of women’s contributions to culture, history and society organized in 1978 by the school district of Sonoma, California. National interest grew and in 1980, President Jimmy Carter issued a proclamation declaring March 8th the start of National Women’s History Week – coinciding with International Women’s Day, which began to be recognized in 1911 and continues to be celebrated annually on March 8th. In 1987, President Carter expanded the proclamation to the entire month of March, and every president since has honored the annual recognition.

Throughout its history, USF has benefitted tremendously from amazingly accomplished women. The following article highlights just a few of their remarkable contributions: 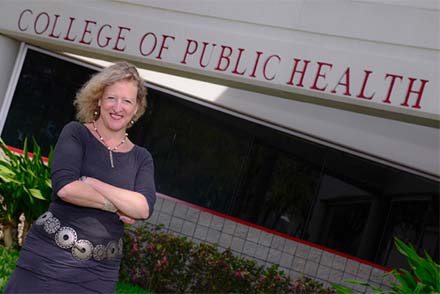 The 2022 theme for Women’s History Month is “Women Providing Healing, Promoting Hope.” This theme celebrates the tireless work of caregivers and frontline workers during the COVID-19 pandemic and the ways that women of all cultures have provided healing and hope throughout history.

At USF, women health professionals, scholars and alumnae have made significant contributions to the field:

USF College of Public Health Dean Donna Petersen has been chair of USF’s COVID-19 Task Force since the onset of the pandemic. In that vital role, she has provided extraordinary service to USF, the region and state, promoting public health practices to keep so many members of the community safe during the health crisis. In 2021, Petersen was recognized for her service as one of six women across Florida who earned the American Council on Education Women’s Network “She Stepped Up Award: Recognizing Extraordinary Leadership in Facing 2020’s Unprecedented Challenges.” 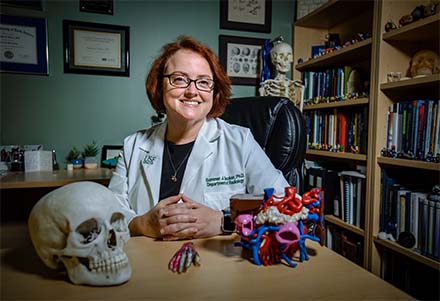 Summer Decker, associate professor in the Department of Radiology in the USF Health Morsani College of Medicine and director of 3D Clinical Applications, was instrumental in USF’s innovative and collaborative development of the 3D-printed nasal swab to address a supply shortage in the early days of the pandemic. Thanks to this groundbreaking solution, health care providers across the nation became better equipped to diagnose and prevent the spread of COVID-19. 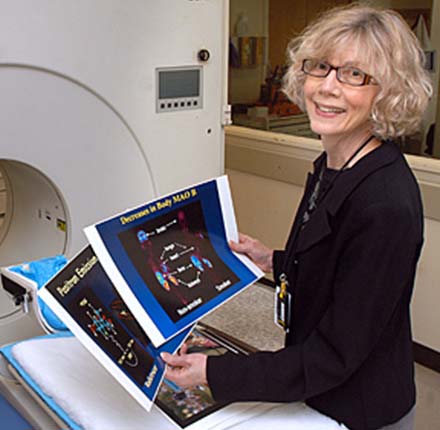 Chemist Joanna Fowler is a world leader in developing molecular imaging that led to major advances in the identification and treatment of illnesses ranging from drug addiction to cancer. She was the first USF graduate elected to the National Academy of Sciences and is an inductee to the Florida Inventors Hall of Fame. In 2009, she was presented with the National Medal of Science – the nation’s highest award for lifetime achievement in science – in recognition of her accomplishments in developing radiotracers to measure changes to the brain circuits that occur in drug addiction and brain diseases. She is a Scientist Emeritus for the U.S. Department of Energy’s Brookhaven National Laboratory in New York and holds eight U.S. patents. 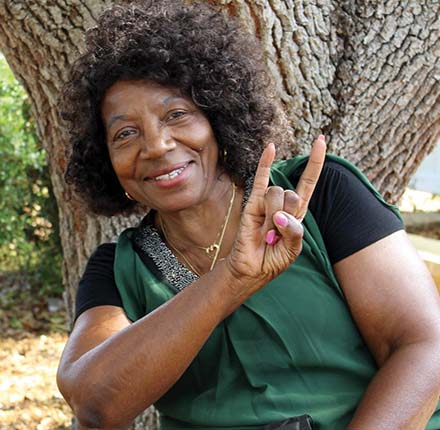 Graduating first in her class at USF, retired Brig. Gen. Carrie Nero continued to break barriers as a nurse serving for nearly 30 years in the U. S. Army Reserves. In 2002, Nero became the first African American nurse to achieve the rank of brigadier general in the U.S. Army Reserves. Nero was also the first director of minority health at the Pinellas County Health Department where she led research on health disparities and sickle cell disease among Black residents. Despite being in retirement, during the pandemic she has volunteered with the USF College of Nursing on a COVID-19 training module and has done outreach with local churches to raise community awareness on vaccines and COVID-19 in Black communities.

Powerful women have increasingly been making a powerful impact at USF and beyond, contributing to the evolving demographic profile of leaders in America.

Leadership among America’s college and university presidents remains predominately white and male. According to a 2016 report from the American Council on Education, only 30% of all presidents were women. Remarkably, USF has been led by a woman for 26 of the past 28 years. Betty Castor, the first woman elected to the Florida Cabinet and the first president pro tempore of the Florida Senate, became the first woman to lead USF in 1994, followed by President Emerita and Professor Judy Genshaft in 2000. Alumna Rhea Law has been leading USF as interim president since July 2021. The president’s cabinet of top administrative leaders today includes several women. 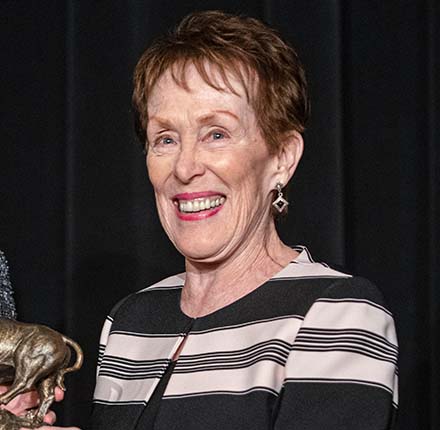 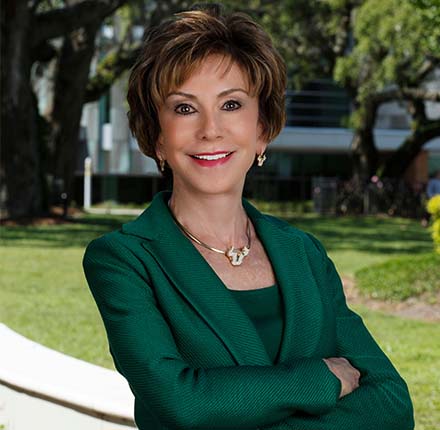 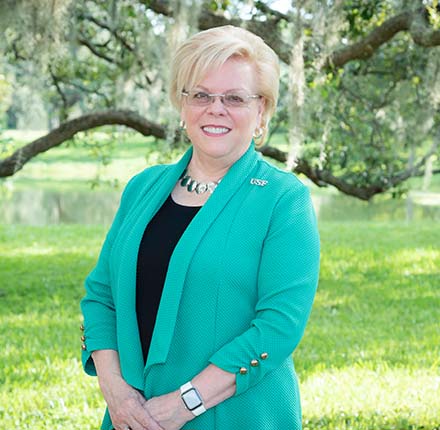 USF’s accomplished women leaders also have been tremendous champions of opportunities to advance women’s leadership and philanthropy in our region. In 2005, Genshaft and philanthropist Carol Morsani created Women in Leadership and Philanthropy (WLP), the first women’s philanthropic organization in the Tampa Bay region focused on developing the intellectual and leadership potential of women through the promotion of mentorship, philanthropy, community engagement and scholarly excellence. Now numbering more than 300 individual and 25 corporate members, WLP has helped stimulate numerous transformational gifts to benefit USF. It has directly raised more than $5 million to support university scholarships and programs, and has invested more than $1 million in grants, scholarships and programmatic funding to assist women students, faculty members and women in the Tampa Bay region. 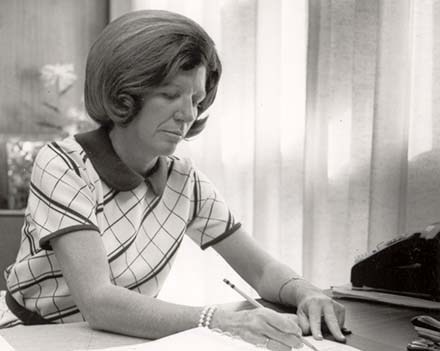 Leadership and dedicated service to USF’s students were hallmarks of Phyllis P. Marshall’s career. Marshall arrived at USF in 1960 – the fourth year of the university – and served as the director of USF’s student center from 1976 until her retirement in 1994. She devoted her career to developing diverse and inclusive student programming at USF. The more than 400 active student organizations at USF today can trace their roots to Marshall’s groundbreaking work. In 1994, after years of lobbying from undergraduate students in the class of 1987, and state legislation allowing for a building to be named after a living honoree, USF’s University Center was renamed the Phyllis P. Marshall Center in her honor. 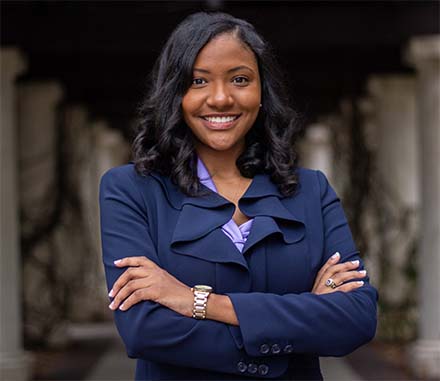 Pioneering women leaders of today – and tomorrow – include Britney Deas, who in 2019 became the first woman to be elected USF student body president in more than 20 years and the first African American woman ever elected to the position. Since then, USF Student Government has continued to increase representation among women. All members of the newest Student Government cabinet, elected in October 2021, are women – a first for USF’s Student Government.

USF boasts an impressive portfolio of alumnae philanthropists who are making powerful impacts on the footprint and offerings of the nation’s fastest-rising university.

Carol Morsani, with her husband, Frank, has given more than $40 million to the university, including to the Morsani College of Medicine that bears their name. Pam Muma and her husband, Les, are the university’s largest individual benefactors, giving more than $56 million to support the Muma College of Business, USF Health and Athletics. The Taneja Family Foundation provided $10 million to name the USF Health Taneja College of Pharmacy – the largest philanthropic gift to a pharmacy school in the state of Florida.

Throughout her 19 years as USF president, Judy Genshaft and her husband, Steven Greenbaum, gave $10 million to various causes at the university. Then, just before her retirement, they made a $23 million gift to build and name the Judy Genshaft Honors College and endow the college’s deanship. It is perhaps the largest gift by any college president to their own institution while still in office.

Kate Tiedemann’s $10 million gift to name the Kate Tiedemann School of Business and Finance still stands as the largest gift in the history of the USF St. Petersburg campus, and the school is one of the few business schools in the country named after a woman. Tiedemann’s spouse, Ellen Cotton, a retired banker and Hallmark store entrepreneur, made a gift of $1 million to establish the Ellen Cotton Endowed Scholarships, which support full-time undergraduate students pursuing all majors in the school. Together, they have also given $3 million to endow the dean’s position with the school in 2019 and another $1 million to create an endowed professor position in finance. All told, they have given more than $15 million to the school to date.

St. Petersburg native and alumna Lynn Pippenger has given nearly $30 million to USF, including a $5 million gift to name the iconic Lynn Pippenger Hall at the USF St. Petersburg campus. Pippenger is the former chief financial officer of Raymond James and began working there as a payroll clerk at the then-unknown brokerage firm in 1969 and helped build it over the years. She created the firm’s human resources department and launched an internal educational program now known as “Raymond James University.”

Demonstrating leadership and loyalty to the USF Sarasota-Manatee campus are USF alumnae Tracy O’Neill and Drs. Anila and Mona Jain. The three epitomize what it means to be active supporters of the campus, with Anila and her mother, Mona, chairing this year’s Brunch on the Bay fundraising event and O’Neill serving as chair of the USF Sarasota-Manatee campus Muma College of Business Advisory Board.

Anila, a physician and medical consultant, also serves as a Campus Board member and is a longtime donor, along with her mother. Both actively support campus events and mentor young students. O’Neill stands out for service as well, having helped guide a generous five-year gift and internship program involving the Lynn Pippenger School of Accountancy in the Muma College of Business and the Kerkering, Barberio & Co. accounting firm, where she works as chief administrative officer. O’Neill is a past Brunch on the Bay chair as well.