University of Trnava (Slovakia) Too bad humans didn’t learn from birds. they fight for territory, but not kill each other 1 April is mainly associated with the so-called A day of fools when we can joke about our loved ones or acquaintances. This European tradition dates back to ancient Rome as a festum stultorum, a day of melting and laughter. However, until the middle of the 16th century, this day was also celebrated as the beginning of the new year and the arrival of spring. At the same time, King Charles IX of France. did not set the beginning of the new year at 1 January.

However, 1 April is also World Bird Day, which is supposed to remind us of the importance and need for bird protection at a time when they are coming to us en masse from their wintering grounds. This tradition also has its deep roots, until the beginning of the last century, more precisely until 1900, and is associated with our Brezno naturalist Otto Herman. Although we have already dealt with this holiday in more detail on the website of the University of Trnava, it may now be necessary to touch on another aspect of the life of birds, from which we humans could also learn a lot. 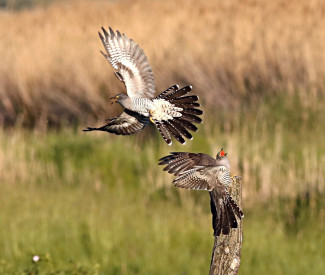 The birds amaze us with their beauty, ability to fly, and now, in the spring, their beautiful singing. It serves mainly to attract females to produce future offspring but also to defend their territory. By signing, males inform other males that this is their territory, which they are ready to support under any circumstances. The region is their living space, providing them with sufficient livelihoods and protection from predators and adverse weather conditions. Not only survival but also their reproductive success depends on the quality of the territory. Males with better territories can get better or more partners. It is, therefore, not surprising that every male wants to seize the best domain, and they are constantly fighting for these territories. Similar territorial or territorial battles take place not only with birds but also with other representatives of the animal kingdom, including humans. After all, today’s borders in Europe are primarily the result of such struggles, or wars, that have taken place in the past. And although today, most are no longer fighting for territorial gains but rather for natural resources (oil, mineral resources, access to the sea), the causes of wars are the same.

It is a pity that people did not learn from nature, especially from birds. The aim of the rival male birds is not to kill or seriously injure each other or destroy their territory, as such behavior would be maladaptive. However, it might seem advantageous from the winner’s point of view. However, the winner could pass the strategy on to the genome of the entire population, which would mean that each opponent would only have to be a winner or a loser, i.e., killed. In addition, such battles are very costly, with opponents risking their own lives or injuries while attacked by potential predators. And this could lead to the gradual weakening or extinction of the entire population or even the whole species.

War is just a cowardly escape from problems in peace. (Thomas Mann)

This fact and the degree of probability that the individual will win also led to the selection of birds in the so-called evolutionarily stable strategy that results in only ritualized mutual battles for territory. This means that every fight for the environment in male birds is governed by genetically fixed rules, which usually do not allow the opponent to be killed or more seriously injured. Dangerous weapons are not used here either, or opponents are equipped with their physical structure so that injuries do not occur. 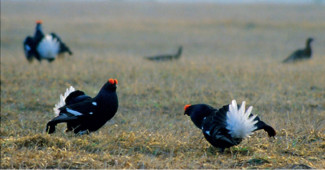 Mutual battles of black grouse on the ground during the flow (Photo by S. Harvančík)

The basis of such fights is mainly impressing or intimidating the opponent and maintaining minimum individual distances to avoid direct physical contact. For example, male wild geese fluff the feathers on their necks and breasts during fights and flutter their wings. This powerful appearance is then enough to scare away others, especially younger males. Sometimes mutual conflicts can escalate and lead to physical contact, but even here, there is a high degree of ritualization. The essence of such a duel in a river fisherman is, for example, just throwing an opponent into the water. Some birds do not even fight for absolute territories. Still, they congregate in neutral places (medicine), where they defend only symbolic (fictitious) domains, to which they then attract females to mate with them. And that such a strategy of fighting in the bird kingdom works successfully, we are convinced every spring by the birds themselves, for whom they are not the threat, but especially us.

Birds, like other animals, therefore, show us how territorial or territorial disputes between two or more parties can be resolved without bloodshed and killing. To date, only two species are known to deviate from this model. They are chimpanzees and humans. Unfortunately, the current situation in our eastern neighbors confirms this.