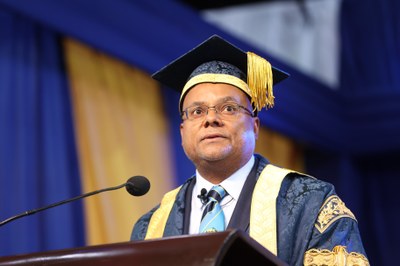 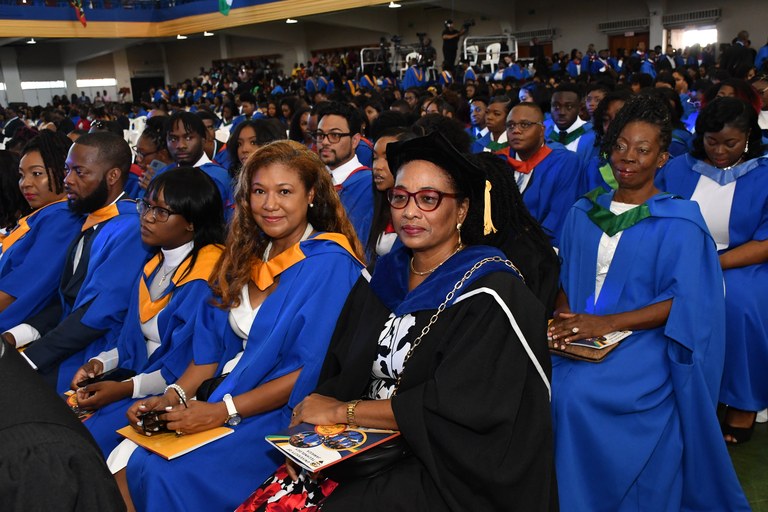 University of Technology, Jamaica celebrated the Graduating Class of 2022 at the Ceremony for the Presentation of Graduates held Friday, November 11, 2022, at the National Arena, Kingston. Over a thousand graduates qualified to receive terminal, master’s and undergraduate degrees, associate degrees, diplomas and certificates in a variety of disciplines.

Noting that the 2022 ceremony was the first in-person graduation in the last two years of the COVID-19 pandemic, newly appointed Chancellor, Mr. Lloyd Carney, in his welcome, expressed “today’s celebration marks part of our forward march into the ‘new normal,’ armed with many lessons learnt and many challenges conquered through perseverance, determination, and resilience.” He urged graduates to “never stop learning”, emphasizing that “higher education training and continuing education are imperatives if we are to ensure that our citizens can compete in the global economy,” adding, “you’re not going to stand still if you stop learning, you’re actually going to fall behind.” The Chancellor also counselled graduates to value their degrees and to put them to good use “building fulfilling careers, healthy families and a healthy nation.”  He also joined graduates in expressing thanks to the University’s administration, the University Community, and immediate and extended families of graduates for “sacrificing to make this day a reality.”

Professor Colin Gyles, CD, Acting President, also lauded graduates for “putting in the hard work, persevering diligently and emerging successful today to receive your well-earned certification.” Noting that the perseverance, resilience and success of the Graduating Class of 2022 are an inspiration to others. Professor Gyles specially recognized the achievements of Deaf graduates Celine Lobban from the Faculty of Engineering and Computing and Ms. Amakeda Wallen of the College of Business and Management, who overcame the odds to receive their Bachelor of Science in Information Technology, Information Systems and Bachelor of Business Administration in General Management, International Business degrees respectively.

Likening their graduation to the yields of a good harvest, the Acting President further urged graduates, as they celebrate, “to use your newfound knowledge and the fruits of your harvest to help to solve problems in our society – pressing problems such as the scourge of crime and violence, violence in schools, vices such as lottery scamming and various other forms of injustices.” Professor Gyles also encouraged the graduating class to be “upholders of good values and attitudes that will preserve and develop our society.”

In his response, Mr. Adams, who is an alumnus of UTech, Jamaica’s predecessor College of Arts, Science and Technology (CAST), and who was instrumental in the establishment of the Jamaica Institution of Engineers (JIE), encouraged budding engineers at UTech, Jamaica to take a special interest in the field of Structural Engineering, citing the international attention that is being placed on the discipline. In expressing gratitude to the University, Dr. Bisasor-McKenzie stated, “I am honoured to be recognized by such a distinguished institution.”  She encouraged graduates to “be passionate about what you do, to treat people with compassion, to be honest and to uphold equity, integrity and justice.” 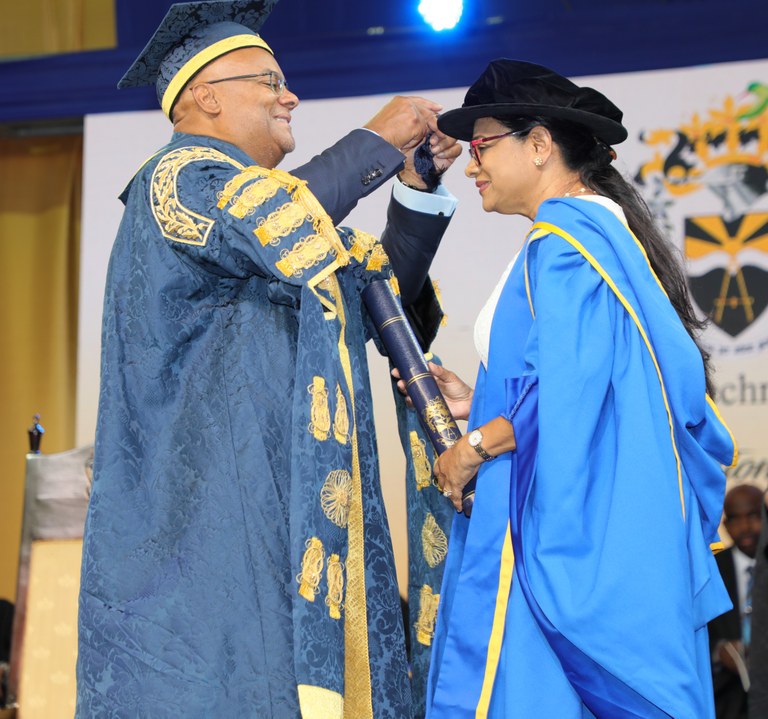 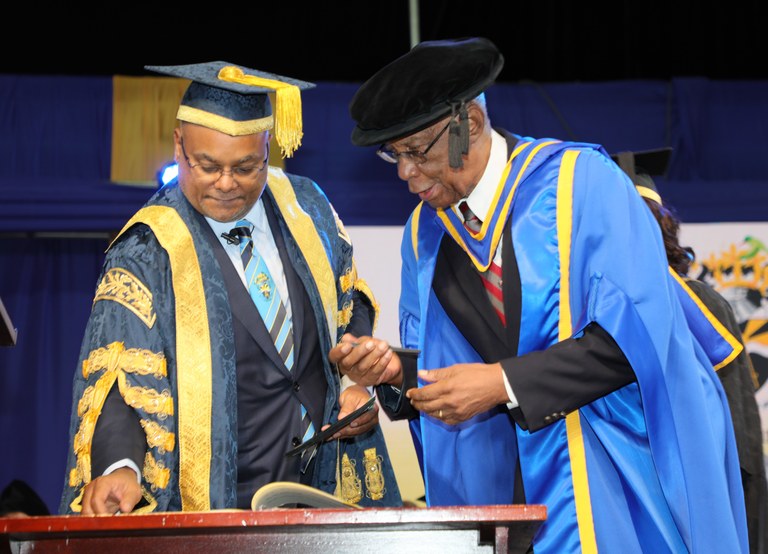 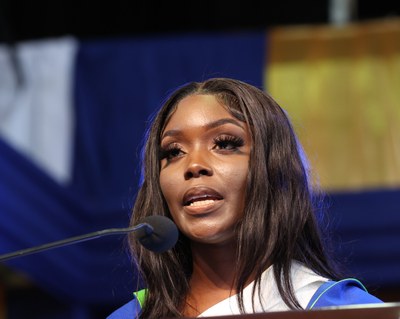 Valedictorian was Tamekia Meeks, who earned the Bachelor of Science in Actuarial Science, Faculty of Science and Sport with first class honours. In her address to the Graduating Class, she expressed that “the door closes on an amazing, thrilling, roller coaster-like experience, but opens to usher in our future; so, let’s take a deep breath and step into a new life.”

She urged her cohort to “embrace new opportunities and to be extraordinary,” adding that “we are graduates, not simply the Class of 2022 or UTech, Jamaica students, but graduates standing with strength, courage, and dignity because we have fought a worthy fight. We have embraced change, defeated giants, and broken-down boundaries, and today we can boldly declare ourselves victorious.”

The Edward Seaga Award, which is presented to the student with the highest overall GPA in the graduating cohort, was awarded to First Class Honours graduate, Ms. Shanya Connell who earned the Bachelor of Science in Computer Science, Faculty of Engineering and Computing.

The Award which is being presented for the fourth year in memory of former Prime Minister and Chancellor, The Most Honourable Edward Seaga, ON, PC is in acknowledgement of his outstanding national service and contributions to the University and to Jamaica. 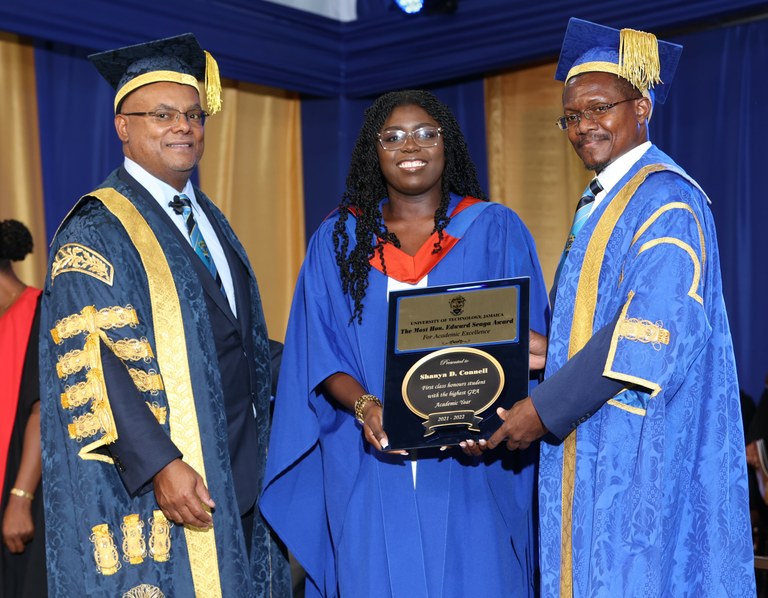 The President’s Honour Roll is comprised of students who have achieved the most outstanding academic performance by attaining qualifications of a grade ‘A’ and GPA of 3.80 – 4.00. In addition, students must be in good standing with the University and must have completed 12 credits per semester. This year, the award was presented to ten students.

Professor Colin Gyles, CD, Acting President presented the President’s Pin to graduates who fulfilled the requirement for the President’s Honour Roll with a grade ‘A’ and a GPA of 3.80 and above. 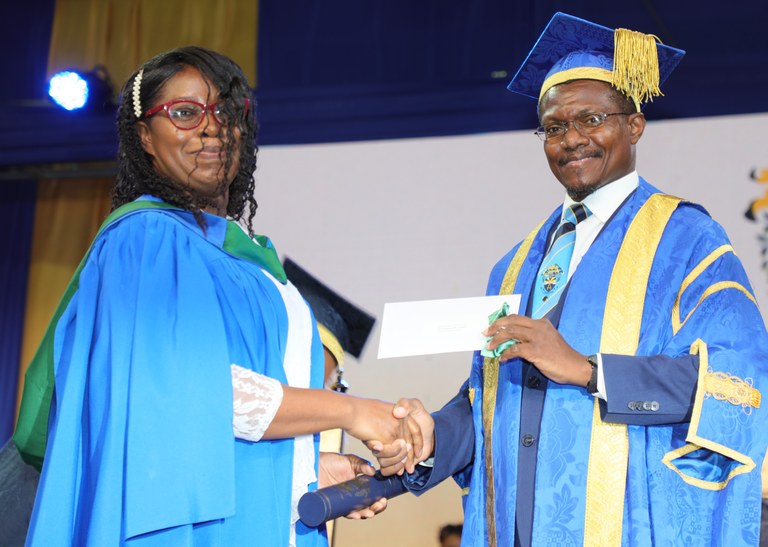 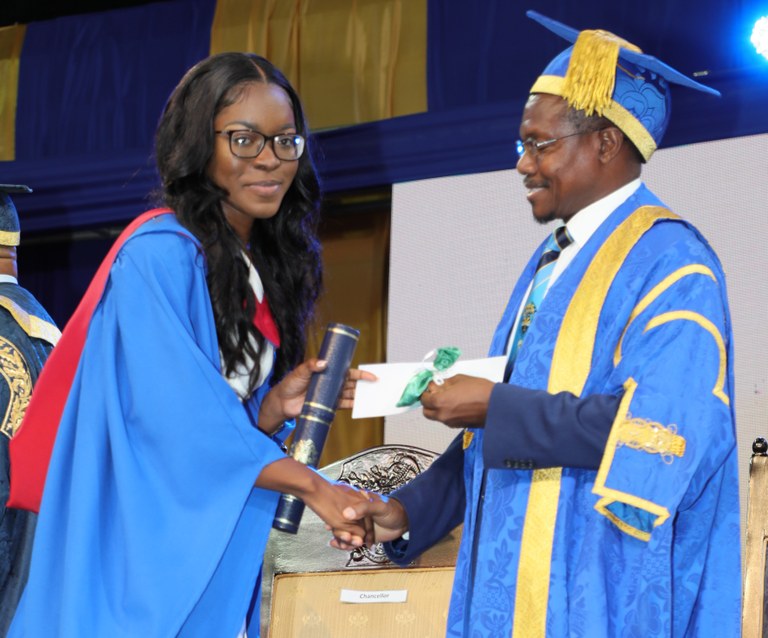 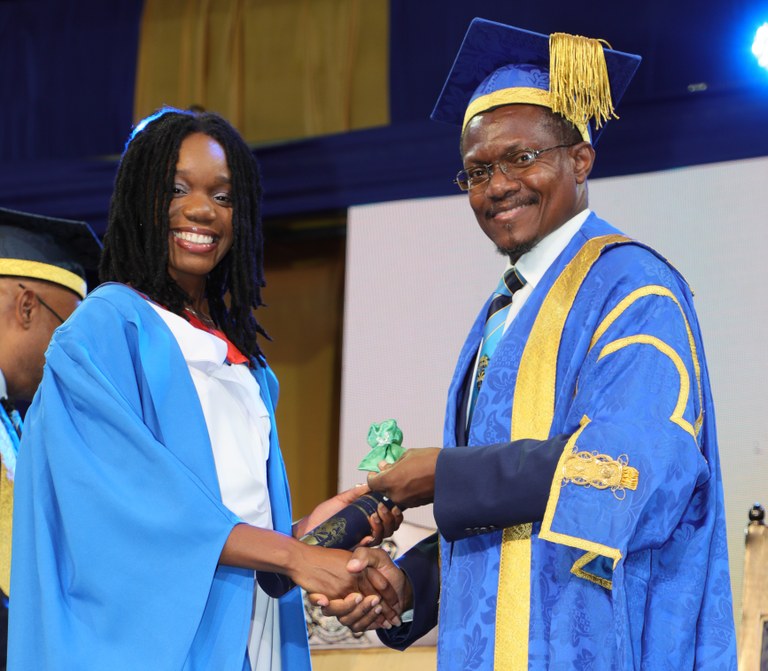 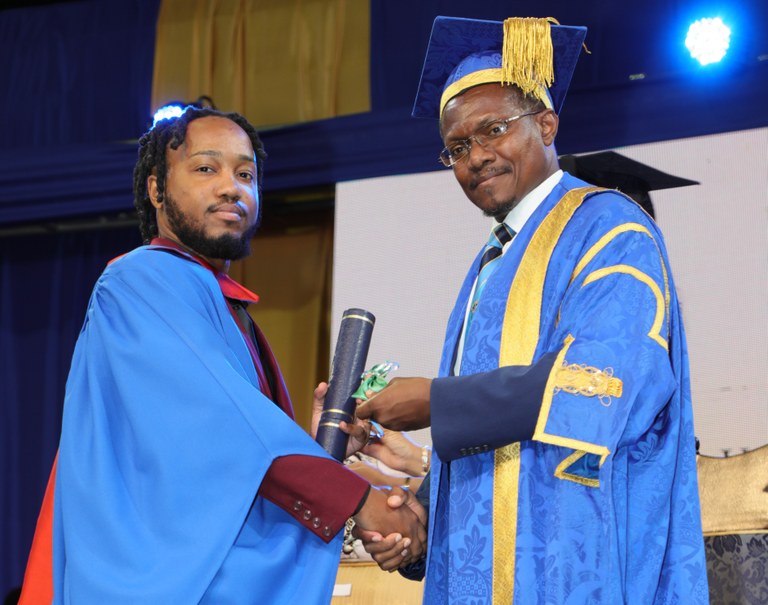 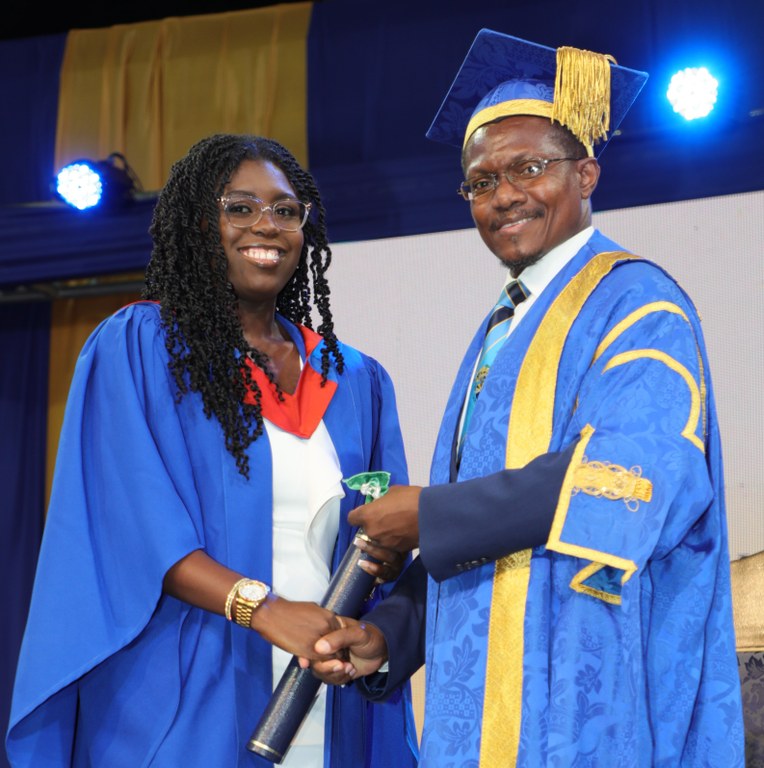 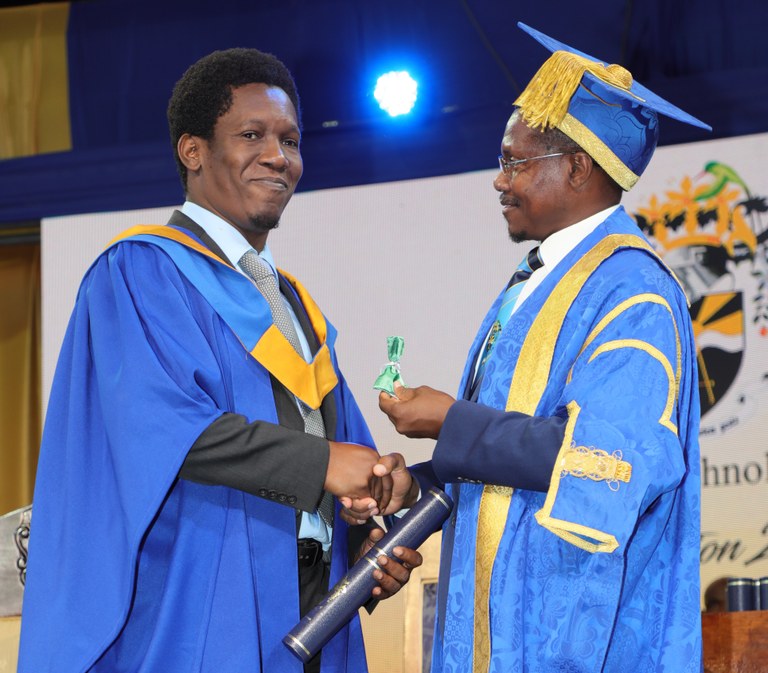 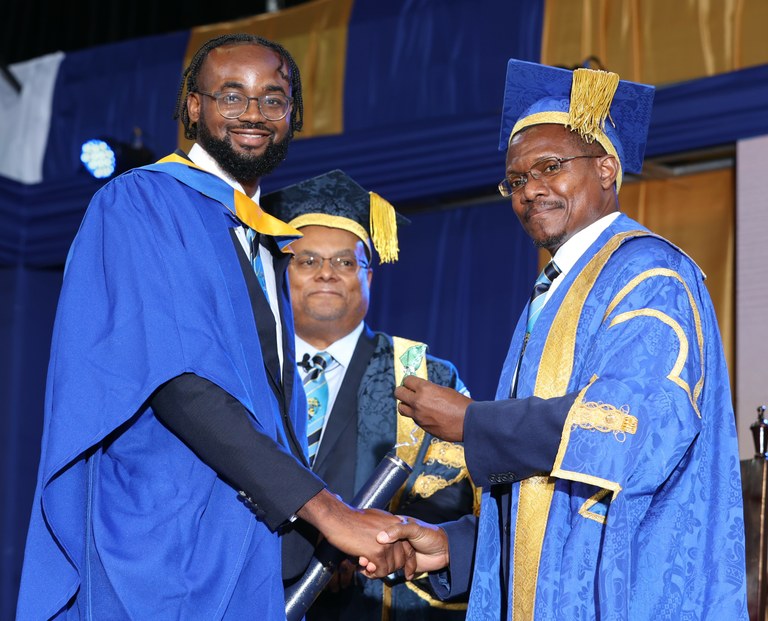 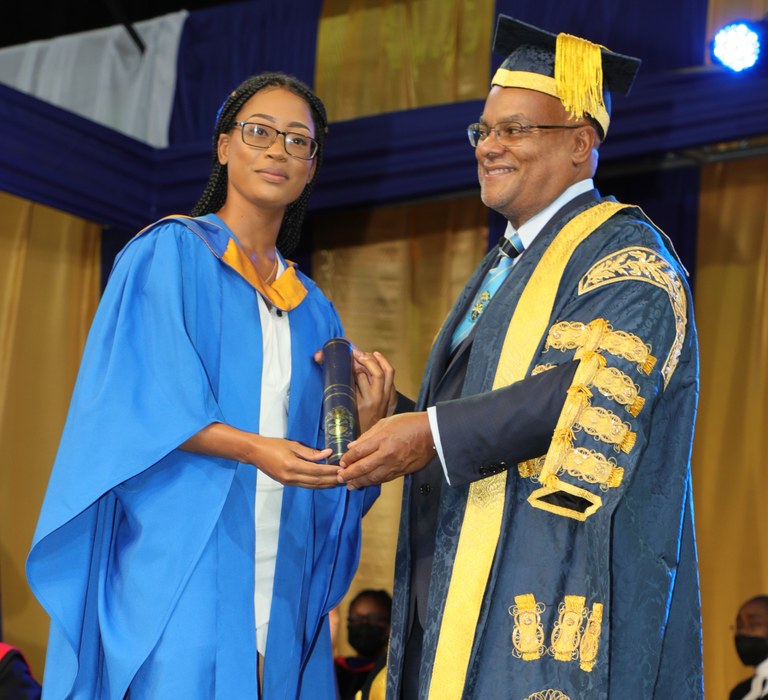 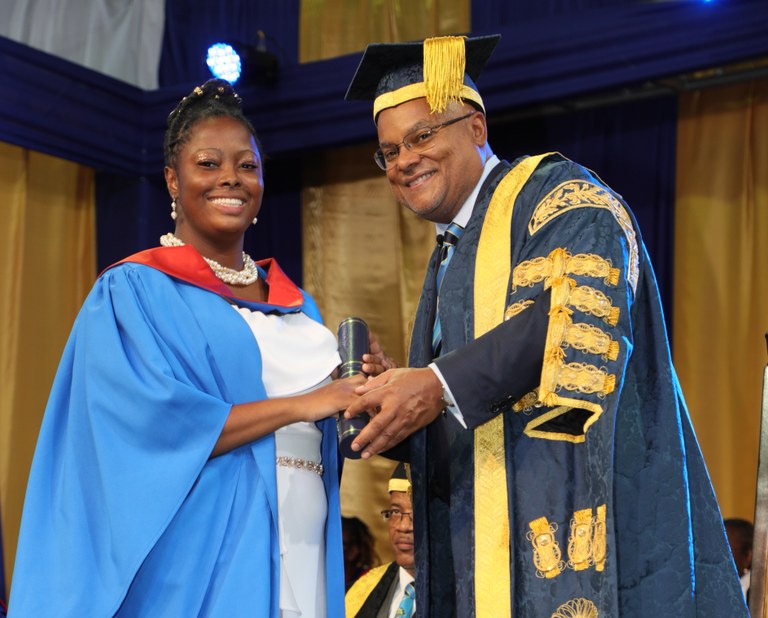 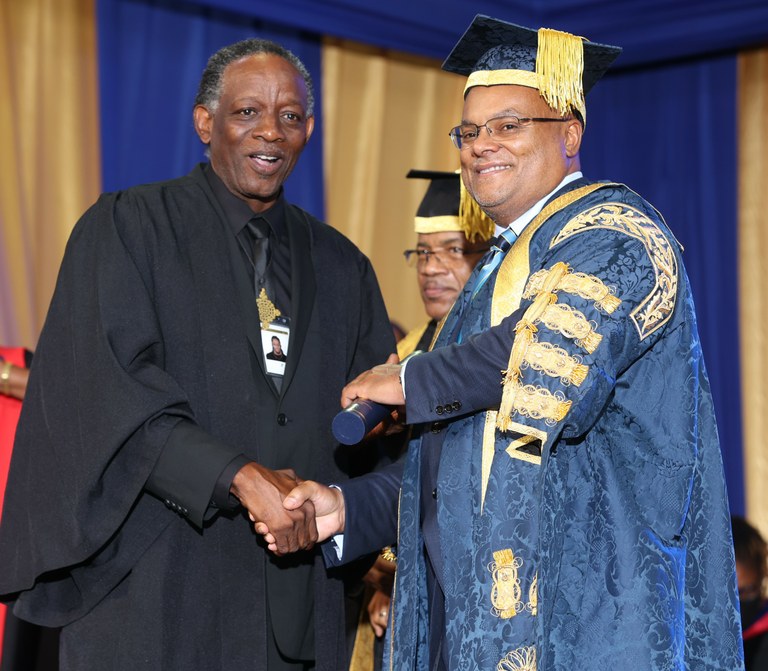 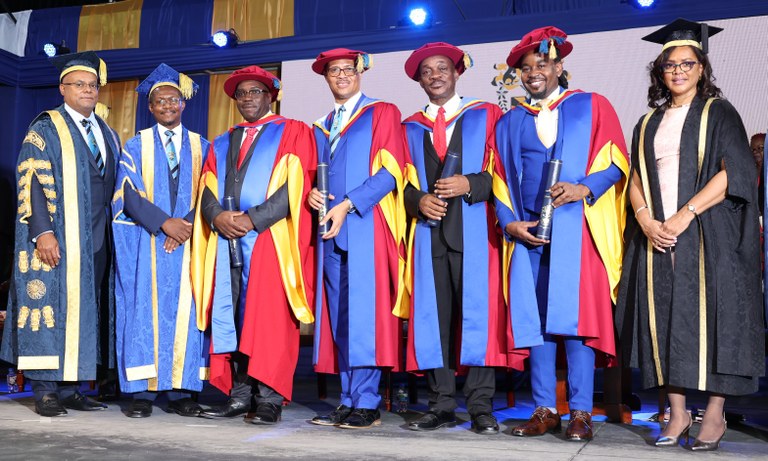 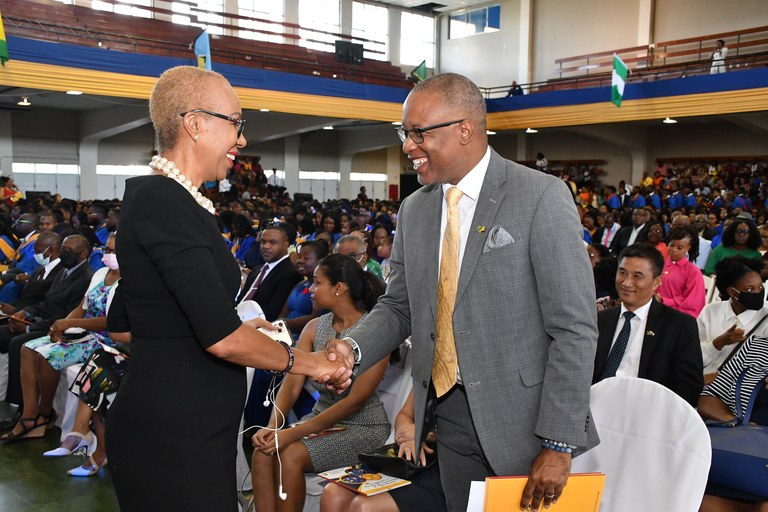 The Honourable Fayval Williams, MP Minister of Education and Youth and Mr. Dunstan Bryan, Permanent Secretary, Ministry of Health and Wellness greet each other at the start of the UTech, Jamaica Graduation ceremony on Friday, November 11, 2022 at the National Arena. 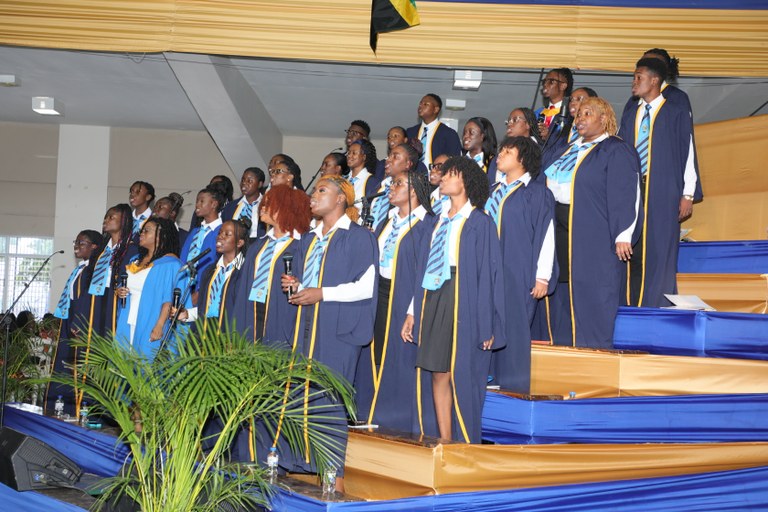 The UTech, Jamaica Choir delivers their rendition of “Unstoppable” in tribute to the Graduating Class of 2022.

Watch the 2022 UTech, Jamaica Graduation Ceremony on YouTube at https://www.youtube.com/watch?v=OWAbcgFAHNI