Recently, “Microscopic Image Exhibition of Xuan Paper” (MIEXP, “见微知纸” in Chinese), a scientific and artistic work of Xuan paper created by a team led by Prof. TANG Shukun from School of Humanities and Social Science in the University of Science and Technology (USTC), and Associate Prof. LIANG Yan from the Center for Arts and Scientific Research of USTC, was permanently collected by the World Skills Museum. 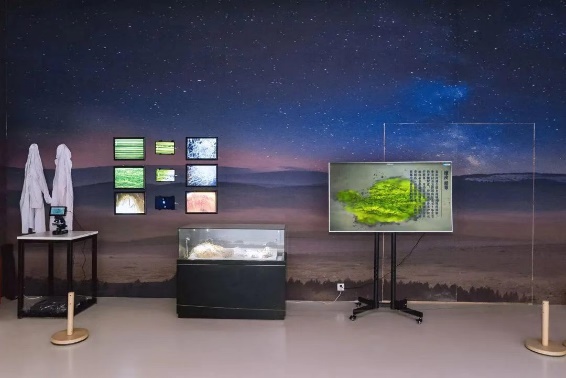 Microscopic Image Exhibition of Xuan Paper, officially launched in 2021, consists of four parts, including a micro-documentary showing the history and making process of Xuan paper, a set of “9-panel” interactive windows showing the microscopic changes in raw materials during the paper-making process, a physical display of raw materials for Xuan paper which allows hands-on experience and a microscope for observing the raw materials on site. The “9 grid” interactive window contains 6 backlit LCDs and 3 tablets, vividly showing how sandalwood bark, Shatian straw and kiwifruit vine was made into Xuan paper.

The spectacular changes of Shatian straw in the paper-making process in microscopic view. (Image from Beauty of Science)

According to Prof. TANG Shukun, Xuan paper, produced in Jing county Anhui province, is the first paper-making project to be included in the UNESCO Intangible Cultural Heritage Lists. Using 3-year-old sandalwood bark, Shatian straw and alpine cold water as raw materials, it takes 108 standard procedures and a total time period of 1-2 years to make a piece of soft, absorbent and non-perishable Xuan paper.

Prof. LIANG Yan’s team has been dedicated to scientific education and dissemination through scientific visualization. Since 2020, Prof. TANG and Prof. LIANG began to discuss the possibility of integrating modern imaging technology into traditional craft projects, how to make it well-received by the audience while maintaining the beauty of modern science. Their final results, the Microscopic Image Exhibition of Xuan Paper, is a creative integration of ancient skills and cutting-edge technology.

Their exhibition being permanently collected by the WorldSkills Museum was a recognition for the work of Handmade Paper Institute and the Center for Arts and Scientific Research of USTC. School of Humanities and Social Science of USTC would strive to instill new vitality to the intangible cultural heritage through an integration of traditional techniques, scientific connotation and artistic expression.