When Sufia Turner joined the College of Nursing, faculty in 2014, she had no previous exposure to simulation in nursing education. But today she has been recognized internationally for her work in the area and is passionate about its potential.

In October, Turner was named the 2022 “Simulation Star of the Year” by Sentinel U, a Connecticut-based company that specializes in web-based simulation education technology solutions for nursing schools and hospital systems. This is the company’s second-annual award recognizing the “most influential and impactful nurse educator” in the U.S. and Canada.

She was also recently named runner-up for the “Emerging Leader in Nursing and Midwifery Education” Award at the Nurse Education Today and Nurse Education in Practice NETNEP International Nurse Education Conference in Barcelona, Spain. Originally she was scheduled to receive a certificate in 2020, but the conference was delayed due to COVID-19. College of Nursing dean Dr. Netha Dyck accepted it on her behalf in October.

Simulation was not part of the UM nursing curriculum when Turner graduated with a bachelor of nursing in 2005. Until she joined the faculty in 2014, she didn’t even know it was an option. But once she was exposed to it, she was excited about the possibilities.

“I just love the creativity component of simulation and the challenge of creating these realistic experiences for students before they go into a clinical environment,” she said.

Turner worked closely with Dr. Nicole Harder, Mindermar professor in human simulation in the Rady Faculty of Health Sciences, to develop the college’s simulation program, which includes the use of life-like manikins in a simulated hospital setting and, as of this year, virtual reality simulations.

The idea is to create common experiences in clinical settings where students learn from them safely before going into a real clinical placement.

“Instead of just throwing the student into an experience where they don’t know how to approach it and might make a mistake, they can do it in a simulation and then step back and really break down the experience and learn from it,” Turner said.

“It allows them to think and apply the knowledge they’ve learned to a clinical experience.” 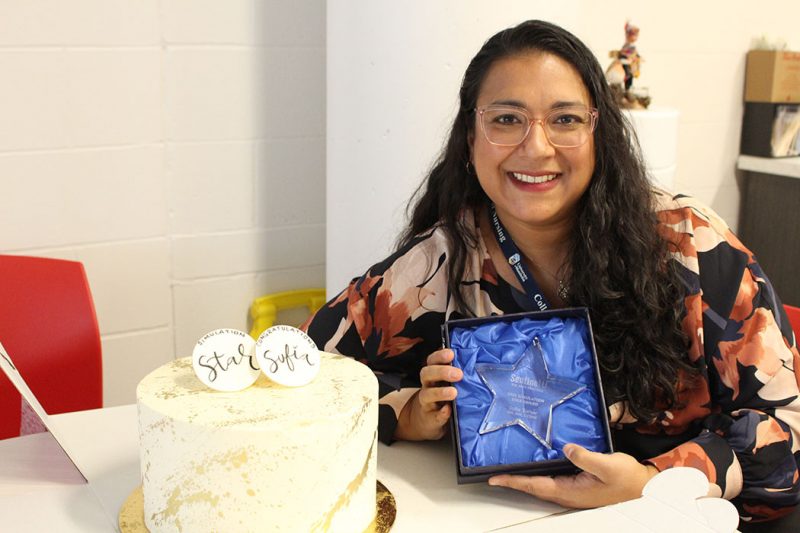 SUFIA TURNER WITH HER “SIMULATION STAR OF THE YEAR” AWARD.

In 2015, Turner supported Harder, also associate dean, undergraduate programs in the College of Nursing, with the implementation of a provincial pilot project that led to the College of Registered Nurses of Manitoba supporting the replacement of 25 per cent of clinical practice with simulation.

“The pilot project was supported by all the deans of nursing programs provincially, and in 2020, due to the global pandemic, was increased to 50 per cent.  Currently, most nursing programs in the province include simulation as part of their clinical practice courses,” Harder said.

Turner also has a master’s degree in nursing from UM that she received in 2020. Her degree is focused on nursing education and her thesis was on the perceptions of psychological safety in simulation from the perspective of undergraduate nursing students.

“Psychological safety means that someone can go into a situation, make a mistake and not get judged or face any major consequences from it. To know that when a mistake is made, a student can take a step back and with an experienced facilitator, look at all angles of that mistake and talk about how the mistake occurred, how it can be prevented and then most importantly, how we can learn from it,” Turner said.

Harder congratulated Turner for the award, noting her dedication to simulation education will benefit the College of Nursing as it expands its program next year.

“We are adding an additional 120 students annually to our nursing program. This will include expanding our simulation program as well, and in order to continue to provide quality experiential learning experiences for our students, we need educators like Sufia to develop and implement these learning experiences,” Harder said.