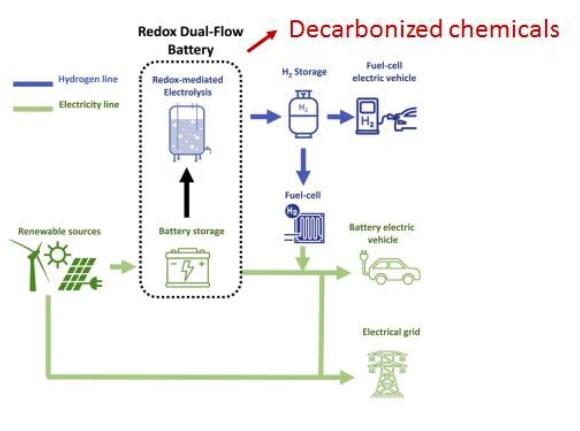 When there is excess, the battery is discharged in a mediated electrolysis to produce hydrogen and valuable chemicals. The energy conversion happens by pumping charged battery electrolytes through reactors. For hydrogen production, the reactor is filled with catalytic particles to start the transfer and hydrogen evolution. For chemical production, the reactor consists of biphasic system where charged electrolyte oxidises chemicals in an organic phase. The reaction products are then extracted into the organic phase.

In this case, the plethora of chemicals that could be made include anti-HIV treatments and lidocaine (pain killer).

The energy conversion operation requires only reactors and catalyst for hydrogen evolution, keeping costs to a minimum.

The Dualflow project was recently awarded £3 million by the European Innovation Council after a call for proposals: EIC Pathfinder challenge: Novel routes to green hydrogen production.

This Pathfinder Challenge’s aim is to develop new processes and technologies to produce green H2 entirely based on renewable sources and non-toxic, non-critical raw material.

“HorizonEU grants are incredibly competitive, and so I am beyond thrilled that our consortium managed to secure multi-million funding for our DualFlow project. This sets our research groups and the University of Greenwich as key players in the field of electrosynthesis and batteries at the international level. It is highly inspiring to be part of this adventure, where all of the members contribute their expertise in common to tackle one of the most significant challenges of our century: energy. The strength of our team is that it encompasses specialists in fields as diverse as novel materials or pharmaceutical compounds’ synthesis. Besides being an incredible scientific journey, it is also a unique human experience. “

Professor Kathryn Toghill, Chair in Sustainable Electrochemistry and Energy Materials at Lancaster University, is leading the hydrogen evolution aspect of the project.

“It is a privilege to be part of such a dynamic and varied consortium striving to achieve cost effective green hydrogen and alternative chemical solutions. Hybrid technologies have so much to offer in this increasingly renewable and decarbonised energy matrix.”