The book presented by one of its co-authors, Luís Ceríaco in the auditorium nº2 of the Rectory of the UMN, is the first field guide entirely dedicated to the poisonous snakes of Angola. Essential for any nature lover, but also for those who live and work in the most remote areas of the country, this guide presents detailed and profusely illustrated sheets that allow you to quickly identify all the species of venomous snakes that occur in Angola. Written in an accessible way, the sheets are accompanied by a distribution map, recommendations and first aid for bites and accidents. Written by experts and using up-to-date scientific information, this book is an indispensable tool for anyone who lives or explores Angola, and can prove to be especially important in cases of accidents involving these animals.

It can also be read in the introductory text of this book that “according to the World Health Organization, accidents with venomous snakes are one of the most neglected public health problems globally, and particularly in tropical regions. In Angola, one of the most biodiverse countries on the African continent, 140 species of snakes are known, of which 34 have poisons that are potentially harmful to humans. Given the importance of the book, Mandume ya Ndemufayo University invited to the event several Institutions that will use it in a practical way, such as hospitals, INEMA, Civil Protection and Firefighters, Veterinary Services, Scientific Research Centers, postgraduate students,

Luís Miguel Pires Ceríaco – Chief Curator of the Museum of Natural History and Science of the University of Porto. In the last ten years, he has dedicated himself to the study of African amphibians and reptiles, having described more than two dozen species new to science. He has supervised masters and doctoral students in Portugal and Angola, and is an associate editor of the international scientific journals African Journal of Herpetology and Herpetological Review . In recent years, he has led several field missions in Angola and São Tomé and Príncipe. He was recently awarded a National Geographic Society Explorer Fellowship (2020).

Mariana Pimentel Marques – Currently a doctoral student at CIBIO – Research Center in Biodiversity and Genetic Resources of the University of Porto. She is the author of the first atlas of amphibians and reptiles in Angola (published in 2018) and is dedicated to studying the diversity of African amphibians and reptiles and managing natural history collections. She has participated in more than ten scientific expeditions in Angola and São Tomé and Príncipe. 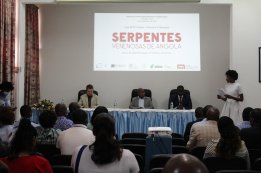 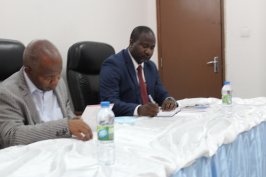 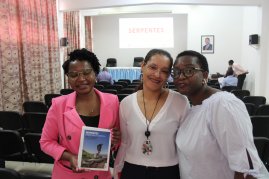