This event coincided with National Work Meeting (Rakernas) of Private Islamic Universities Cooperation Board (BKSPTIS). This meeting invited at least 400 Islamic Private Universities (PTIS) from various regions in Indonesia. BKSPTIS is aimed at promoting and increasing synergistic cooperation between PTIS in Indonesia.

As the main Advisor of BKSPTIS, Jusuf Kalla in his lecture emphasized the importance of cooperation between PTIS. With these cooperation, PTIS can harness the advantage from one another, and creates outstanding power to develop the nation.

“If the meaning of cooperation can be implemented, this would become a huge power. This is because education is the foundation for innovation and technology, while it is these two that advances a nation” said a man who is a former Vice President of the Republic of Indonesia in 2004 – 2009 and again in 2014 – 2019.

Jusuf Kalla also reminded the audience about the importance of realizing every plan we have arranged. This nation must be filled with executor, not the planner.

“If the indicator of an advanced nation is the number of conference and seminar, Indonesia would be the most advanced one,” he said, as the audience cracked in laughter.

“Seminars and conference are good when it is accompanied with implementation framed in cooperation,” he added.

It is not unnoticed by JK, that what the nation needs is entrepreneur minds. JK instantiated his the Prophet Muhammad’s life story who was also known as a trader. We know that the Prophet received revelation at the age of 40, died at the age of 63, traded since the age of 13. Which means, he traded for 27 years.

“If we have the responsibility to follow the Prophet’s way of life, we should certainly move to trading world or at least have entrepreneur mindset,” JK asserted.

In the second seminar, Mahfud MD reminded the audience about the importance of Islam moderation in national and state affairs. Mahfud reflected on the process prior to independence. The process that involved two organizations, BPUPKI and PPKI.

“Indonesia was founded under an agreement, or also known as mitsaqan galidsa between primordial ties,” Mahfud, who currently holds the position as the Coordinating Minister for Politics, Law and Human Rights Affairs, pointed out.

According to Mahfud, there are five pillars that becomes the foundation of our nation’s integration. “The first one is pluralism and response to plurality, tolerance, unity in diversity, democracy, and nomocracy for order,” Mahuf explained.

After the seminar, the event is continued with Rakrenas or National Meeting of BKSPTIS, and also Plenary Meeting, Sections Meetings discussing problems and actual issues as a means of strengthening cooperation between PTIS. (DD/ESP) 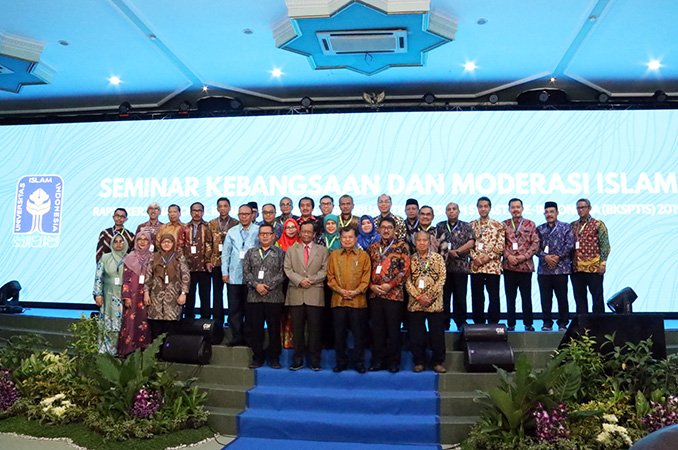