In a first, an uncrewed aircraft system, or drone, operated by an Embry-Riddle Aeronautical University team has begun searching for threatened and endangered sea turtles beyond visual sight lines.

Thanks to a first-ever “beyond visual line of sight” (BVLOS) waiver from the U.S. Federal Aviation Administration (FAA), Turtle Tech team members from Embry-Riddle can fly their fixed-wing Sentaero aircraft farther offshore. Built by Censys Technologies Corporation, the long-endurance Sentaero is equipped with sensors, cameras and a collision-avoidance system that allow it to navigate offshore airspace safely.

The work is part of a collaborative project conducted by Brevard Zoo with the support of Northrop Grumman. The goal of the project is to learn more about sea turtle reproductive behaviors by capturing images of individual animals and leveraging artificial intelligence to identify them by species, gender and shell patterns.

Flying farther offshore, beyond visual sight lines, is vital to finding more turtles. Brevard Zoo Executive Director Keith Winsten noted that sea turtles in the water aren’t easy to spot from the beach. “You also don’t want to approach them with a boat,” he added. “A drone that can fly at a higher altitude does not disturb sea turtles, and it allows us to study migratory and reproductive habits that could be key to protecting these animals.”

That is a critical goal for conservation researchers because Florida plays an outsized role in the world’s overall sea turtle population. The state’s eastern coast is the top nesting site in the world for loggerhead sea turtles. Huge leatherbacks, green sea turtles, rare Kemp’s Ridley turtles and the Hawksbill also nest off Florida’s shores. Most species are threatened or endangered. 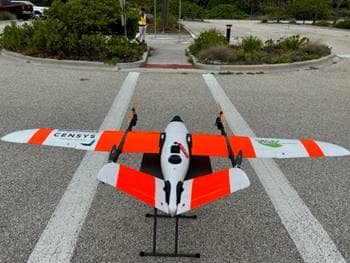 In May, test flights at Melbourne Beach, Florida, went smoothly, with the Sentaero soaring 390 feet above the turquoise sea, said Dr. Nickolas “Dan” Macchiarella, professor of Aeronautical Science. Then in June, the Embry-Riddle team flew the aircraft BVLOS two miles offshore while testing new camera lenses. “There were multiple turtles in the water,” Macchiarella noted. “We are now refining the aircraft’s payload image-capturing capability to automatically detect and identify sea turtles.”

“We believe that this is Embry-Riddle’s first FAA research and operational BVLOS waiver,” Macchiarella said. “Being able to safely fly the aircraft beyond the operator’s visual line of sight will allow us to more effectively survey a larger area.”

To ensure safety during the drone’s test flights in May, three operators — recent graduates Patrick Hunter, Jose Cabrera and Adrian “Imai” Bates-Domingo — took their Embry-Riddle education a step farther by completing specialized training and certification. At Melbourne Beach, many additional students, recent alumni and Censys Technologies staff supported communication and operations. Others piloted a quadcopter-type drone that kept an eye on the Sentaero.

The drone took off and landed vertically. In between, it flew over the near-shore environment beside the Barrier Island Sanctuary, carrying a payload of two red-green-blue cameras with polarized filters. Capable of clicking off a photo every second, the drone recorded any images that it identified as turtles. Researchers are in the process of analyzing their results.

A neural network — basically, a series of algorithms that learn over time — helps the drone’s artificial intelligence system become better and better at correctly identifying sea turtles. That aspect of the project will be supervised by Dr. Ilhan Akbas, an assistant professor of Electrical Engineering and Computer Science.

Meanwhile, Dr. Patrick Currier, professor of Mechanical Engineering, is guiding students in the physical development of the payload and integration with the Sentaero. The payload system combines high-resolution global shutter cameras with an NVIDIA Jetson NX processor to support in-flight neural network detection. That is a key capability for BVLOS operations due to limited radio bandwidth, Currier explained.

Dr. John M. Robbins, associate professor of Aeronautical Science, who, along with Macchiarella, has been directing the Turtle Tech project, pointed out that it has provided hands-on job training for multiple students. For example, students at the Melbourne Beach tests had direct interaction with UAS leader Censys Technologies — a company founded by Embry-Riddle alumnus Trevor W. Perrott, who is now president and CEO.