The International Centre of Insect Physiology and Ecology (Kenya) IKEA Foundation provides USD 5 million grant to icipe, for a One Health initiative that will contribute to a resilient, circular, and regenerative food system in eastern Africa 4 November 2022: In eastern Africa, a myriad of interconnected developmental challenges persists. They include the imperative to improve food and nutritional security, create novel income generation and job creation opportunities especially for women and the youth, and build cleaner, healthier, and more resilient environments.

Through various initiatives, the International Centre of Insect Physiology and Ecology (icipe), has demonstrated that One Health, nature-based approaches that have at their heart balanced and optimised benefits for people, animals, and the environment, are an impactful way of tackling these issues.

Now, the IKEA Foundation will partner with icipe to harness two of the Centre’s innovations: the vegetable integrated push-pull technology and black soldier fly farming, into a One Health package that will increase production of cereals, the main staples for most households; as well as high-value vegetables, poultry and fish, which will augment the region’s largely starch-based diets, thus countering malnutrition and hidden hunger while protecting the environment.

In the region, the productivity of cereals is largely constrained by insect pests, like stemborers and the fall armyworm, the parasitic Striga weed, as well as climate variability and change. Low soil fertility is also a major factor. For example, more than 80 percent of the maize production areas in Kenya are highly deficient in soil phosphorous. Vegetable cultivation, though vital in boosting nutritional security and the livelihoods of smallholders, especially women who play a major role in the value chain, is hampered by pests such as aphids, the invasive Tuta absoluta, spider mites, whiteflies, root-knot nematodes, and wilt diseases. Synthetic pesticides are expensive; they are often ineffective and their indiscriminate and frequent use has adverse impact on the health of people and the environment. Inorganic soil fertilisers are also costly, with global events, such as the current Russia-Ukraine conflict, dramatically increasing prices.

While poultry and fish industries are among the fastest growing agri-businesses, their full potential is hindered by the shortage and high cost of feed protein additives, which include soybeans, fish oil, fishmeal, seed cakes and various grains. In addition, it is unsustainable to rely on such products as they are also food for people.

Further, due to inadequate opportunities in rural areas, many people, especially the youth, are migrating into the urban centres, making eastern Africa one of the fastest urbanising regions in the world. The accelerated urbanisation has created new urgencies for jobs, and a rising waste management problem.

“Individually, the icipe vegetable integrated push-pull and black soldier fly farming innovations have been phenomenal successes,” says Dr Segenet Kelemu, icipe Director General & CEO. “By scaling them up in a unified, integrated and synergistic manner, we will help farmers to deal with the historical burdens of crop pests and poor soils while reducing over-reliance on synthetic pesticides and expensive inorganic fertilisers.”

“The combined innovations will be transformative and demonstrate the potential for a circular economy in eastern Africa” says Dr Subramanian Sevgan, Head, Environmental Health Theme, icipe. “Through effective recycling of organic wastes, provision of nutrient-rich and locally produced poultry and fish feeds and organic fertilizers for crops, the innovations will tackle challenges of food, nutrition security and climate change, while strengthening capacity for innovation and unlocking new entrepreneurial opportunities”.

“We are excited about this new collaboration with icipe because it is aligned to our mission of improving the lives of vulnerable children by enabling their families to create sustainable livelihoods. This project also provides a great opportunity to work with a network of like-minded partners to ensure a resilient, circular and regenerative food system in Africa,” says Annelies Withofs, Programme Manager, the IKEA Foundation. 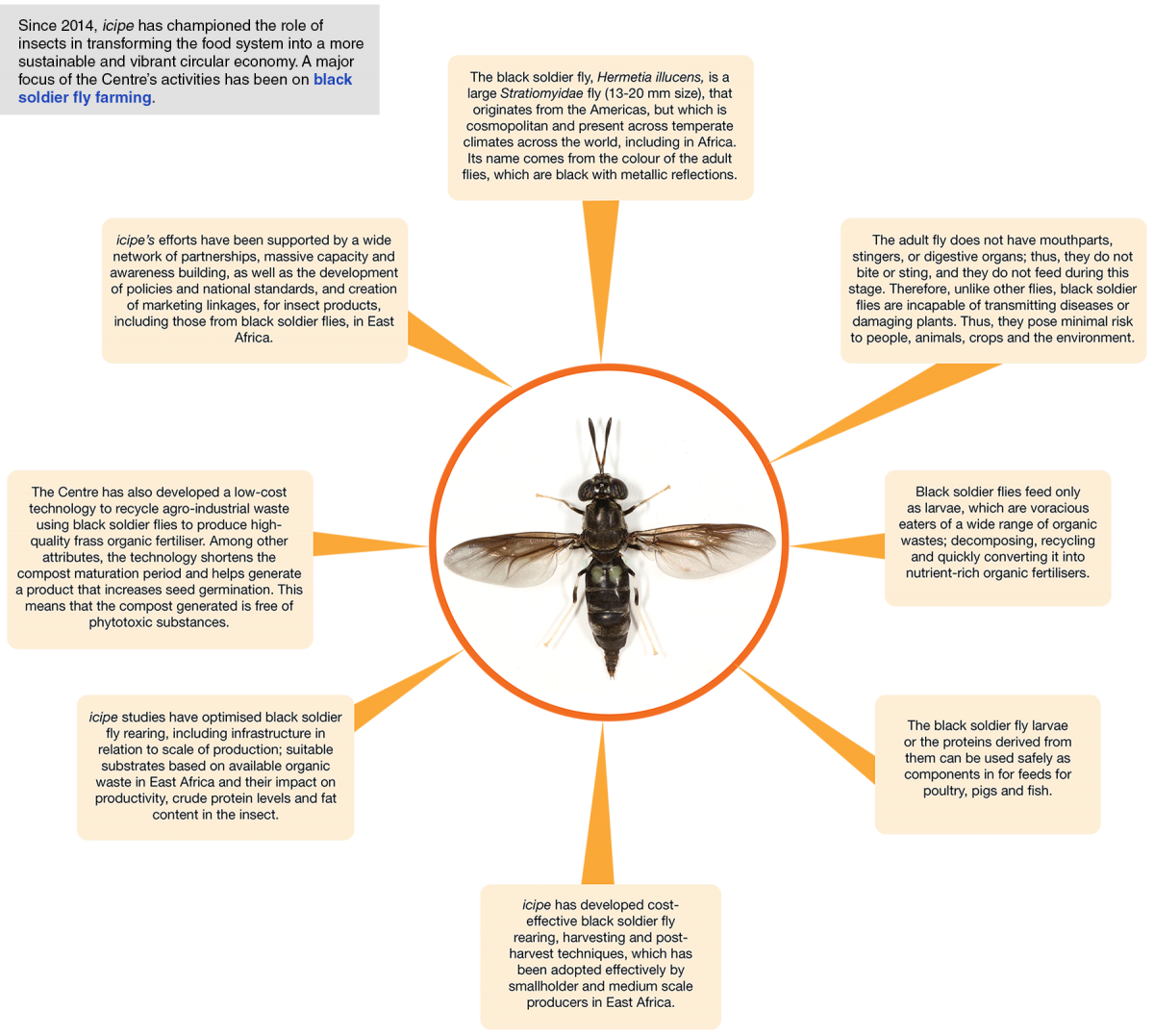 To be implemented in Kenya, Rwanda and Uganda, the four-year initiative will be executed within the framework of a circular economy. Thus, the project will have as its underlying principles the elimination of waste and pollution; circulation of products and raw materials through reuse or recycling; and the regeneration of natural systems by conserving or redeploying resources.

The project will result in the benefits outlined below.

The IKEA Foundation is an independent philanthropy focused on creating brighter lives on a livable planet through its grant giving efforts. It is funded by INGKA Foundation, owner of Ingka Group. Learn more at www.ikeafoundation.org.

The International Centre of Insect Physiology and Ecology (www.icipe.org): headquartered in Nairobi, Kenya, is the only research institution in Africa working primarily on insects and other arthropods. The Centre conducts world-class science, and then translates this knowledge into innovate environmentally friendly, affordable, accessible and easy to use solutions to tackle crop pests and disease vectors. icipe’s role also extends to the conservation and sustainable exploitation of the beneficial insect biodiversity. Thus, icipe works through the 4Hs Themes – Human Health, Animal Health, Plant Health and Environmental Health – a holistic and integrated framework that has sustainable development as its basis, to improve food security, health and the overall well-being of communities in Africa. We gratefully acknowledge the support of icipe core donors: Swedish International Development Cooperation Agency (Sida); Swiss Agency for Development and Cooperation (SDC); Australian Centre for International Agricultural Research (ACIAR); Federal Democratic Republic of Ethiopia and Government of the Republic of Kenya. The views expressed herein do not necessarily reflect the official opinion of the donors.