Core funding is financial support provided to institutions for the production of valuable global public goods, and support of general operat­ions, research, management and administration costs. Such resources not only ensure smooth day-to-day functions; they contribute to greater impact and stronger organisations as they enable the improvement of processes, thus enhancing productivity and efficiency.

For research and development institutions like icipe, core funds safeguard resilience and capacity for innovation by enabling longterm, visionary planning. They allow infrastructural upgrades, from important physical and intellectual infrastructure to scientific equipment; as well as staff capacity strengthening, communication, finance and research management dockets. Significantly, core funds support the exploratory phases of novel research areas, helping to generate the evidence base needed to attract project investments. The funds also serve as a bridge for researchers and projects between funding phases. Indeed, without core funds it would be difficult for research and development institutions to effectively undertake their main business.

ACIAR joins a list of icipe core donors that includes: the Swedish International Development Cooperation Agency (Sida); the Swiss Agency for Development and Cooperation (SDC); the Federal Democratic Republic of Ethiopia; and the Government of the Republic of Kenya. 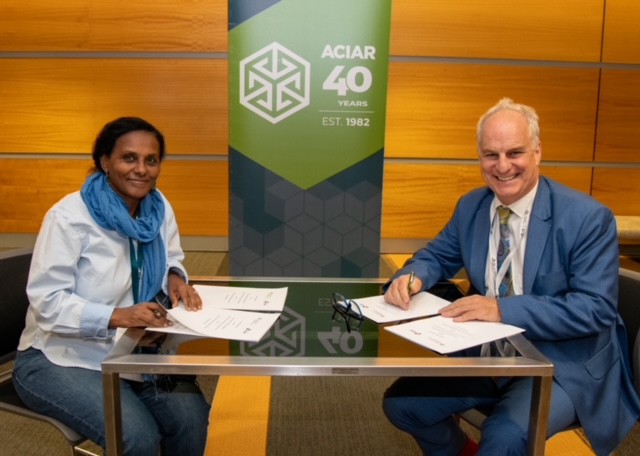 The core contribution agreement builds on ACIAR’s longstanding project-based investments in icipe, especially in the promotion of edible insects as a way of From through the Cultivate Africa’s Future Fund (CultiAF), ACIAR and the International Development Research Centre (IDRC), Canada, invested CAD 1,870,500 in the icipe-led ‘Integrating insects in poultry and fish feed in Kenya and Uganda’ project (INSFEED phase 1). The project established the scientific basis, including the identification of suitable insect species and their nutritional attributes; tested the technical feasibility and economic profitability; and laid the foundation for favourable social and policy conditions for using insect-based feeds, in the two countries. (See: https://www.aciar.gov.au/aciar-idrc-partnership/cultivate-africas-future-fund partnership; and https://www.idrc.ca/en/cultiAF)

From October 2018 – October 2021, ACIAR and IDRC invested CAD 1,495,900 in the ‘Insect feed for poultry, fish and pig production in sub-Saharan Africa’ project (INSFEED phase 2). The outcomes included the development of cost-effective insect rearing, harvesting and post-harvest techniques, and their adoption by smallholder producers. The risk factors associated with insect-based feeds along the food chain and the mitigation strategies were expounded. This knowledge formed the basis for policies and standards for safe and sustainable use of insects in the food and feed sector. The potential effects of insect-based technologies on livelihoods were assessed along the value chain. In particular, by applying a gender lens, the findings facilitated the development and testing of gender responsive insect feed supply models. (See: Insect feed for poultry, fish and pig production in Sub-Saharan Africa (INSFEED2) | ACIAR; Innovative idea flies | ACIAR; Kenyan agripreneurs fly high with black soldier flies | ACIAR; Cultivating Africa’s Future Fund: innovation through partnership | ACIAR).

ACIAR has expanded investments in icipe’s edible insects activities with an AUD 3 million grant for a project on ‘Upscaling the benefits of insect animal feed technologies for sustainable agriculture intensification in Africa’ (PROTeinAfrica), to be implemented from March 2022 – June 2025. The initiative will build on the outcomes of INSFEED, while also boosting economic, environmental and social sustainability in Kenya, Uganda, and Rwanda. (See: Upscaling the benefits of insect-based animal feed technologies for sustainable agricultural intensification in Africa (PROTeinAfrica) | ACIAR).

Closely aligned to PROTeinAfrica is the creation of the Emerging Insect Technology Hub (EIT-Hub), a platform for collaboration and knowledge-sharing around emerging insect technologies, among research and industry partners, scientists and investors in Africa and Australia, established in 2022 by ACIAR, icipe and AgriFutures, Australia. (See: Insect industry abuzz with new knowledge sharing Hub | ACIAR).

“While ACIAR’s continuing partnership with icipe in research and development is highly important, we also recognise the importance of core contribution, for the Centre’s sustainability. Indeed, similar investments made by ACIAR to various organisations have been vital in boosting human and infrastructural capacity, as well as cross cutting research and pilot studies,” says Prof. Andrew Campbell, Chief Executive, ACIAR.

“We believe that ACIAR becoming a core contributor to icipe marks the beginning of a new and exciting phase, with numerous, mutual benefits for both institutions, for Australia and Africa, and for Africa and the Asia-Pacific region,” observes Prof. Kym Anderson, an Australian and Chair of icipe Governing Council, who has previously chaired the Policy Advisory Council advising Australia’s Minister for Foreign Affairs.

“icipe operates in partnership with more than 60 universities and 300 partners, with a huge number of initiatives across Africa and globally, and a holistic approach on human, animal, plant and environmental health. Thus, ACIAR has a strong partner in icipe to impact the African continent,” notes icipe Director General & CEO, Dr Segenet Kelemu.

icipe’s wide research and development portfolio will augment ACIAR’s regional strategy, which aims to reduce poverty and increase food security through an agriculture-led integrated framework of development. The Centre’s network of partners and collaborators will be useful in ACIAR’s vision of promoting regional collaboration as a way of creating new opportunities, particularly for smallholder farmers. There is also the potential of a reciprocal relationship for Australia’s own agricultural challenges.

Over the past several years, the importance of stronger Australia and Africa linkages has been rising. There is also appreciation of the need for a strategic approach and discourse, as well as systematic integration, to forge sustainable relationships and realise desirable bilateral outcomes. ACIAR’s central role in Australia’s national interests and the particular focus on economic diplomacy, combined with icipe’s position as a well-respected development and thought leader in Africa, will contribute to the much-desired shift and impacts.

There are also increasing efforts towards more constructive and concerted interactions between Africa and the Asia-Pacific region. The rationale is that the Asia-Pacific region, the fastest-growing economic powerhouse in the world, offers a pragmatic model of development for Africa. Further, the relationship would increase two way trade and attract investments. It would also allow joint efforts to address shared challenges, for example harmonised regulations on national resources management. ACIAR has a long history of investments in the Asia-Pacific region, which could serve as an entry point for icipe and the Centre’s partners.

The International Centre of Insect Physiology and Ecology (www.icipe.org): headquartered in Nairobi, Kenya, is the only research institution in Africa working primarily on insects and other arthropods. The Centre conducts world-class science, and then translates this knowledge into innovate environmentally friendly, affordable, accessible and easy to use solutions to tackle crop pests and disease vectors. icipe’s role also extends to the conservation and sustainable exploitation of the beneficial insect biodiversity. Thus, icipe works through the 4Hs Themes – Human Health, Animal Health, Plant Health and Environmental Health – a holistic and integrated framework that has sustainable development as its basis, to improve food security, health and the overall well-being of communities in Africa. We gratefully acknowledge the support of icipe core donors: Swedish International Development Cooperation Agency (Sida); Swiss Agency for Development and Cooperation (SDC), Federal Democratic Republic of Ethiopia and Government of the Republic of Kenya. The views expressed herein do not necessarily reflect the official opinion of the donors.