A billionth of a billionth of a second. The attosecond (10-18 second) is the smallest currently measurable unit of time. Even light is slow at this scale: it ‘only’ travels 0.3 nanometres (0.3 nm or 0,3.10-9 m) per attosecond.  The Attophysics research group at the Interactions, Dynamics and Lasers Laboratory (LIDYL – Univ. Paris-Saclay, CEA, CNRS) is aiming to study matter on the femtosecond (10-15 second) and attosecond time scale. “The increasingly short processes we’re interested in in matter belong to smaller and smaller time scales,” explains Pascal Salières, who leads the group. “Typically, the rotation of molecules takes place in a few picoseconds (10-12 seconds). The vibration of molecules, and the movement of atoms inside molecules – all this takes place on a smaller scale: in femtoseconds.” It was the observation of atom dynamics on the femtosecond scale during a chemical reaction which earned the Egyptian American chemist, Ahmed Zewail the Nobel Prize for Chemistry in 1999.

Beyond the atomic scale lies the challenge of the electron, one of the constituents of the atom. How can we detect electron dynamics, knowing that they are even faster than atom movements? “For the electron, the typical time scale given is 150 attoseconds. This figure corresponds to the rotation time of an electron on the first Bohr orbit of a hydrogen atom,” explains Pascal Salières. Observing electron movements would lead to a detailed study of fundamental processes, including the transport of information and the transformations of matter, which have electrons for privileged vectors (via the transfers of charge, energy, etc.). After this analytical stage, the manipulation of these processes would follow. “Once all this behaviour has been understood on the electronic scale, it will be possible to try to direct it, to optimize it, to accelerate it, etc.” adds the researcher.

The problem with attosecond radiation sources

Which process makes it possible to see ultra-fast interactions? Just as in photography, it is crucial to be able to ‘capture’ images to within a few attoseconds or femtoseconds. This requires the use of ultra-short pulses of light generated by a laser. However, a key issue has persisted for a long time: lasers are fundamentally incapable of forming attosecond pulses. “This is because the optical cycle time is being approached. Radiation shorter than a few femtoseconds cannot be produced while remaining at a wavelength in the visible range or in the near-UV wavelength,” explains Pascal Salières.

In 1988, researchers at the Department of Atomic and Surface Physics (now LIDYL) discovered the generation of high-order harmonics – the key to attosecond pulses. In electromagnetics, the smaller the wavelength of a signal, the greater its frequency (the number of signal oscillations per second). By generating waves in the extreme ultraviolet (XUV) range, it is possible to obtain very fast oscillating pulses with greatly reduced pulse duration. The current record is around 50 attoseconds. “It’s done by focusing a very intense laser. It passes through a jet of gas, where it interacts with atoms. It then tears off a tiny fraction of the electron cloud and accelerates its electrons,” continues Pascal Salières. “However, as the laser field reverses every optical half-period, the electrons are drawn back to the nuclei at this point. However, they’ve accumulated a lot of kinetic energy when they come into contact with the laser, which they release in the form of a flash of radiation in the XUV range.” So, by playing with the ‘elasticity’ of the bond between the electrons and their nucleus, scientists can create an attosecond XUV flash at each half-period of the laser. This is the goal of the ATTOLab, created in 2016 and managed by LIDYL, which provides attosecond radiation sources to users throughout Europe.

Two pulses are better than one

The ‘photograph’ of an event on an attosecond scale is actually done using two pulses. Today, this is the basis of the ‘pump-probe’ method used to observe such processes. “The ‘pump’, or first pulse, excites an atom and as a result one of the electrons moves to the conduction band in the higher electronic layers,” explains Marino Marsi, an associate professor at the Solid State Physics Laboratory (LPS – Univ. Paris-Saclay, CNRS). “The electron then ‘descends’ through the electronic layers, through a natural process of de-excitation. It’s by using a second laser pulse (the ‘probe’), that the dynamics of this phenomenon are observed. This allows us to study nature in an excited quantum state – to look at matter in a nonequilibrium state.” By modulating the distance between the two laser pulses, and by repeating the experiment many times (under strictly identical conditions), scientists are able to reconstruct, image by image, the excitation and de-excitation processes of matter by the attosecond.

However, what about the ‘recording’ in addition to this ‘snapshot’? The most effective spectrom-eter capture system is Velocity Map Imaging (VMI). Unlike other detection techniques, such as the magnetic bottle electron spectrometer, angular resolution is maintained here. Using a VMI spectrometer, it is possible to project the electrons and reconstruct their direction of ejection and their energy.

At LIDYL, thanks to the pump-probe method, researchers in the Attophysics team have studied resonant two-photon ionisation using excited states of helium. “These measurements are very interesting because they give us access, in a very precise way, to the potential of movement of the electron and to all the electron-electron, electron-nucleus or crystal lattices interactions. Understanding those interactions is fundamen-tal to the study of chemical bonding,” explains Pascal Salières. The researcher is full of hope and is exploring the possibilities offered by this new physics. “This type of experiment will then be extended to systems more complex than helium, such as molecules, nanoparticles, solids, etc., in order to study the electronic correlations.” Indeed, only theoretical approximations are currently capable of handling these complex systems. With new experiments such as these, physicists will be able to challenge and validate, or not, established theoretical approximations. “It’ll be possible to measure the diffusion times of electrons, and the decoherence effects due to their interactions with the environment. This is essential for defining the electrical properties of materials and their ability to carry information.”

Observing the emission of an electron ‘with the naked eye’

“More and more applications are emerging now that we’re able to produce well-controlled attosecond radiation sources,” reveals Pascal Salières. Within his LIDYL team, attosecond physics is used, for example, to observe the phenomenon of the photoelectric effect as it has never been seen before. During the 19th century, Heinrich Hertz was the first to define the photoelectric effect. In 1921, Albert Einstein received the Nobel Prize in Physics for his photoelectric effect theory, where the absorption of an energy particle (a photon) by an atom results in the almost instantaneous emission of an electron. It is this ‘almost instantaneous’ aspect that tormented the LIDYL researchers. What was happening between the absorption of the photon by the atom and the emission of the electron?

Using attosecond pulses and the pump-probe technique, scientists finally succeeded in reconstructing the dynamics of electron emission during these phenomena. In March 2022, the physicists at LIDYL, together with colleagues from the Institute of Molecular Sciences, Orsay (ISMO – Univ. Paris-Saclay, CNRS), the Institute for Light and Matter (ILM – Univ. Claude Bernard, CNRS) and the Laboratory of Physical Chemistry – Matter and Radiation (LCPMR – Sorbonne Univ., CNRS) published the first ever three-dimensional film which followed the photoemission process at the atomic level and on the attosecond scale. For the first time, the photoelectric effect, which had been just theory for over 100 years, could be observed attosecond by attosecond. In doing so, they also solved the quantum process of two-photon photoemission from helium. This is an important result. As photoemission is the basis for some of the finest spectroscopic analysis methods, this work paves the way for a deeper understanding of electronic correlation effects in matter – from atoms and molecules to solids.

Lou Barreau, a lecturer at ISMO, is also interested in the photoelectric effect. “Thanks to attosecond science, we discovered that photoemission is not instantaneous, but that it’s also variable depending on the type studied, the energy sent and the environment of the atom,” explains the chemist, who above all wants to link these studies to chemical phenomena. As part of the Dynamics and Interactions: Radiation, Atoms, Molecules (DIRAM) team at ISMO, she is studying the photoemission process in different molecules. “I analyse photoemission in rare gases and also monitor the dynamics (dissociation, or isomerization) within a molecule using the pump-probe method. In this way, I can observe the dynamic couplings of electrons.” The molecules being studied are iodine compounds (diiodine I2, iodine monochloride ICl or iodine monobromide IBr) used in the gas phase for practical reasons, as, unlike the condensed phases (liquid or solid), gas phase molecules are isolated and do not interact with solvents, which allows access to their intrinsic dynamics. “However, observation of attosecond events in solution is being developed. This will be of huge interest! This is something which the attosecond community is moving towards,” explains Lou Barreau.

Researchers at LIDYL, in partnership with ISMO, are also taking a closer look at electron ejections and what these processes entail. “A hole is made in the electron cloud of a molecule which can then migrate from one edge of the molecule to the other,” explains Pascal Salières. “Depending on where this hole is located, the bonds in the molecule become weakened, causing the molecule to fragment. By controlling where this hole is located, it would become possible to direct molecular fragmentation and control chemical reactivity. The applications which would follow, such as the creation of new products which couldn’t be designed naturally, would be endless.”

At the LPS, Marino Marsi is focusing on quantum matter and topological materials. These have characteristics which are as rare as they are intriguing. A topological material is electrically conductive on its surface but insulating in its interior. “The electrons in these materials have special properties. They are particularly insensitive to disturbances, as they are in ‘protected’ states. These are the same properties which make these materials ideal conductors,” continues the professor. Using ultrafast laser pulses, he studies the electronic dynamics of different quantum materials (graphene, bismuth selenium Bi2Se3 alloy, bismuth and tellurium Bi2Te3 alloy, etc.). The LASERIX platform, which is housed at the Irène-Joliot Curie – Physics of Two Infinities Laboratory (IJCLab – Univ. Paris-Saclay, Univ. Paris Cité, CNRS), is dedicated to the development of coherent XUV sources produced by intense lasers and their applications. It provides Sophie Kazamias, the scientific manager of the platform, and various teams, with the possibility of studying several types of physics. Among the projects covered here, PALLAS is aiming to develop a plasma laser accelerator. “This involves transforming a gas into a plasma and then exciting it in order to create an electric field which will then accelerate the electrons,” explains Sophie Kazamias and Moana Pittman, the technical manager of LASERIX. “This type of acceleration is 1,000 times more powerful than current particle acceleration technologies. However, it’s still very difficult to control,” point out the scientists.

Of equal interest is the DeLLight experiment (which stands for Deflection of light by light) which explores the vacuum and its as yet unknown properties using an ultra-intense pulse laser. The researchers involved are hoping to show that, like any existing optical medium, the vacuum is a nonlinear optical medium. This means that the application of a very high intensity electromagnetic field in a vacuum would be able to change its optical index. If the attosecond currently represents an ‘ultimate barrier’, it will probably be crossed one day. The zeptosecond (10-21 second) is already being discussed among specialists. “When I started my research, the picosecond was THE ultimate barrier!” remembers Marino Marsi. It is therefore easy to imagine the new barriers which remain to be crossed and what future discoveries are still subsequently waiting to be made. 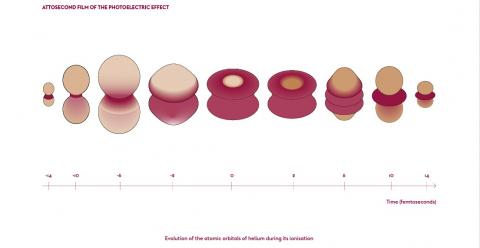