Scotland’s first Centre for Military Research, Education and Public Engagement is being launched at Edinburgh Napier in the run-up to Armed Forces Day.

Building on the wide-ranging education and support the university already offers, the new centre will provide the armed forces with a community hub on campus. 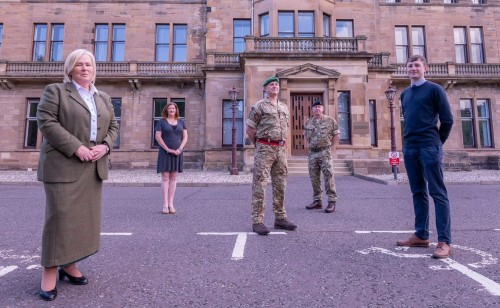 This centre, being launched at the university’s Craiglockhart campus, taps into Edinburgh Napier’s rich military past as Craiglockhart was a hospital for officers during the First World War. It’s there that the meeting of great minds Wilfred Owen and Siegfried Sassoon took place, inspiring some of their most renowned poetry. The extensive War Poets Collection is now hosted at Craiglockhart.

The Centre will further develop Edinburgh Napier’s reputation as a military-friendly university which is progressing its far-reaching research and education activity. Researchers at Edinburgh Napier have already been pivotal in describing a new condition called Complex Post-Traumatic Stress Disorder (CPTSD) that can affect military personnel. Edinburgh Napier is also actively involved with two international military networks focussed on research into education, wellbeing and military HR. It has identified even more opportunity to share knowledge around widening education opportunities for service members and veterans.

Already widely regarded for their collaborative work with the armed forces in higher education and research, Edinburgh Napier was the first Scottish university to receive the gold award from the Ministry of Defence in recognition of their commitment to the armed forces community, including ex-service personnel and their families. Their year-round activities help promote the skills and experience that a military career, at all levels, can bring to potential employers.

The new centre will bring all Edinburgh Napier’s activity in this area into one hub to pave the way for more collaboration that will benefit the wider Scottish armed forces community. This development unites with government ambitions to make Scotland a destination of choice for veterans and their families.

Dr Gerri Matthews-Smith, university military research lead and centre director, said: “Thanks to the historical significance of the Craiglockhart campus, and the work done supporting armed forces education and research, Edinburgh Napier has always had strong links to the armed forces. The opening of this new centre demonstrates Edinburgh Napier’s commitment to the future of the armed forces and cements the foundations of our future activity supporting ex-military personnel in their transition to civilian life.

“We are currently working on a variety of projects including Military Transition in Scotland, and working alongside the Association of Directors of Education in Scotland (ADES) National Transitions Officer for Children and Young People of Armed Forces Families in Scottish Schools, which supports the wider network and their families. This comes following years of engagement with local schools, like Colinton Primary, to highlight to children of military families that they can aspire to a university education. This new centre will be essential in allowing us to continue working on research that benefits the military community.” 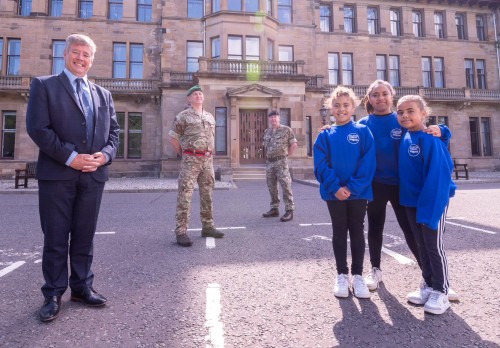 Claire Biggar, university lead for military public engagement, said: “It’s crucial for us as an establishment to acknowledge the contribution armed forces make to our community. Over the years, we’ve worked alongside veterans and ex-service personnel to offer more educational opportunities for those coming out of the armed forces. The new centre offers an extension to our already existing services and has been driven by the pivotal research being done throughout the university.

“We hope our centre provides those within the armed forces with a central hub where they feel supported in whatever their next career aspirations are.”

Keith Brown MSP, Cabinet Secretary for Justice and Veterans, said: “The Scottish Government is wholehearted in our commitment to supporting our Armed Forces, veterans and their families in Scotland. These communities are an integral part of society with a considerable contribution to make.

“The launch of Napier University’s new Centre for Military Research, Education and Public Engagement is exactly the sort of innovative project which supports our wider commitment to make Scotland a destination of choice for veterans and their families.”

Alister Jackson was a Warrant Officer in the Air force nearing his resettlement when he began studying for a Bachelor of Arts, Business and Enterprise (BABE) at Edinburgh Napier University.

Choosing Edinburgh Napier had a variety of benefits for Alister that eased his transition into civilian life – not only did the course take into account work-based learning, but it also recognised his prior learning, allowing him to join in 3rd year and complete the degree within a year. When he was unexpectedly sent on a short-term deployment, Napier worked with him to accommodate this into his learning. Alister added; “the flexibility of Napier was really good when I got deployed at short notice and they were able to offer me a couple of solutions that allowed me to deliver my portion of the project from a bunk in Kabul.”

He is now working in the Civil Service and is able to bring what he learned on his course at Napier to this role.

Upon leaving school, Cameron Hughes joined the Army Reserves for two years before deciding to study International Festival and Event Management at Napier. With Napier’s support, he was able to smoothly integrate his studies and his Reservist commitments, allowing him to continue being a part of the Reserves throughout his degree.

Cameron added; “there are definitely transferable skills between being in the Reserves and being at university that you can take both ways. Both sides have been really supportive throughout my studies”. While at Napier, Cameron helped to establish the Armed Forces Network and arrange a variety of courses and events with them.

The Armed Forces Network also introduced an adaption to the extension policy which allowed anyone with Reserve commitments to have extra time for assessments, a change that Cameron welcomed and which demonstrated Napier’s commitment to supporting members of military in their learning.

Following a varied career in the RAF that took him to countries including Norway, the Falkland Islands and Saudi Arabia, Squadron Leader Colin Macpherson transitioned to the RAF Reserves under a full-time contract in 2016. During his tour as a command and leadership specialist in the Tedder Academy of Leadership at the RAF College Cranwell, he discovered Edinburgh Napier’s Doctor of Business Administration (DBA) course and decided to return to studying. Colin said: “Edinburgh Napier offers an excellent portfolio of academic programmes both full-time and through part-time distance learning.  The university is sympathetic to the demands of military commitments and flexible enough to allow continued learning development.”

Colin’s wife, Squadron Leader ’Toria’ Macpherson, also plans to undertake a DBA at Edinburgh Napier following the end of her next deployment as media liaison officer at Al Udeid Air Base. Victoria added: “Having seen and supported my husband through his DBA it became clear quite quickly that the university offer a high-quality programme led by dedicated and highly effective staff. It was the Edinburgh Napier DBA programme that sparked my interest in taking a DBA myself rather than the other way around.”