A scientist from the University of Southampton has played a key role in helping a UK-Omani company, which eliminates CO2 by turning it into rock, being named as the winner of the 2022 Earthshot prize in the Fix our Climate category.

Juerg Matter is a professor of Geoengineering and Carbon Management at the University of Southampton and sits on the scientific committee of winning company 44.01, which gets its name from the molecular mass of CO2.

Prince William, who founded the Earthshot Prize with the Royal Foundation in 2020, announced this year’s winners at a ceremony in Boston in the US (2 December 2022). Each winner will receive £1m.

The prize is judged by an international council which includes leaders from the fields of business, philanthropy, science and entertainment. The panel looks for tested, scalable solutions that can help repair the climate and prevent further harm. 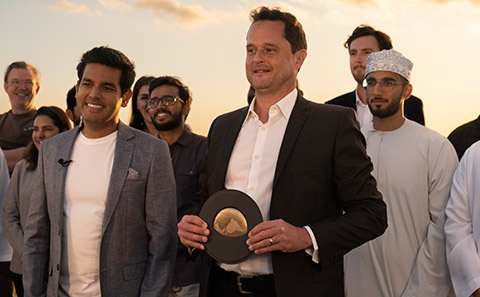 This is the latest vote of confidence in the company, 44:01 and in CO2 mineralisation in peridotite, a rock found in large quantities in Oman as well as in America, Europe, Asia and Australasia.

Born in Bern, Switzerland, Professor Matter gained his PhD at ETH Zurich prior to moving to the USA. He moved to the UK nine years ago from New York City where he worked at Columbia University. Professor Matter has settled in Winchester with his family and his work, with his 10 strong team at the University of Southampton’s School of Ocean and Earth Science, involves developing novel methods for removing CO2 from the atmosphere and dispose it via enhanced weathering and mineralisation.

He said: ““We are delighted to have been recognised by the Earthshot Prize. Winning is a recognition of my research of the past 15 years and the impactful and hard work we are doing at 44.01 to implement our solution to tackle climate change.

“Removing CO2 from the atmosphere will be critical if we are to avoid the most disastrous effects of climate change, and we believe peridotite mineralisation can offer a safe, permanent cost-effective means of eliminating CO2 once it has been captured. Thank you to everyone who has supported us so far, and we look forward to working with Earthshot to scale our technology internationally.”

44.01 has ambitious aims to mineralise one billion tonnes of CO2 by 2040. As the world transitions to clean forms of energy, 44.01 is also providing new employment opportunities for engineers and geologists working in the fossil fuel industry.