University of Technology, Jamaica as part of onboarding activities to welcome newly appointed Third Chancellor, Mr. Lloyd Carney, hosted him on the Papine Campus for a special two-day inaugural visit on September 29 and 30, 2022. The series of welcome events included meetings with the Executive Management Team and Academic Management, as well as courtesy calls with Staff Unions and Student Leaders.  The Chancellor also participated in a tour of the Campus and was formally introduced to the wider University Community at a Town Hall Meeting held at the Shared Facilities Building and live streamed via YouTube.

On his arrival on Thursday, September 29, 2022, the Minister of Education, Youth and Information Hon. Fayval Williams, MP, accompanied by the Ministry’s Permanent Secretary Mrs. Maureen Dwyer and Mr. Aldrick McNab, member of the Council’s Search and Selection Committee for the Appointment of Chancellor, also paid a special visit to the Campus to join in welcoming the Chancellor during his first scheduled meeting with members of the UTech, Jamaica Executive Management team.

Minister Williams who formally appointed Mr. Lloyd Carney as Chancellor with effect from August 22, 2022, for a period of seven years, on the recommendation of the University’s Council, noted that he comes to the post with a lot of “confidence” to make a difference, given his vast experiences as a highly regarded IT engineer, entrepreneur and venture capital investor. Affirming the Ministry’s support “to be a guide” to the direction in which Mr. Carney would like to take his leadership as Chancellor, the Minister expressed that “I am truly looking forward to working with you and the managerial staff here at UTech, Jamaica to resolve all the issues that we need to resolve from an administrative perspective and from a governance perspective, so that everyone can move forward in a way in which we share on one accord.” She also added that “our goal is to see the growth and continued improvement of UTech, Jamaica.”

Referencing the recent mass resignation and migration of teachers and the ongoing budgetary constraints faced by the Government, Minister Williams cautioned the leadership team to keenly consider current global trends for workforce demands and to make needed adjustments to ensure the University’s sustainability, emphasizing that more graduates in Technology/STEM fields are in high demand.

Professor Colin Gyles, CD, Acting President provided an overview of the history, development and contribution of the institution to national development, in which he pointed out that Technology is deliberately infused into all courses of study, adding that “some 70% of our courses are in the STEM disciplines of Science, Technology, Engineering and Mathematics.”

Mr. Carney in his remarks, noting that he has had the opportunity to serve Jamaica through his foundation which has provided scholarships to many students at multiple institutions, said he embraces this newest opportunity to impact the lives of the more than 11,000 students enrolled at the University of Technology, Jamaica, adding that he looks forward to serving all constituents of the University including students, alumni, colleges/faculties and members of administration in the interest of propelling the institution forward. 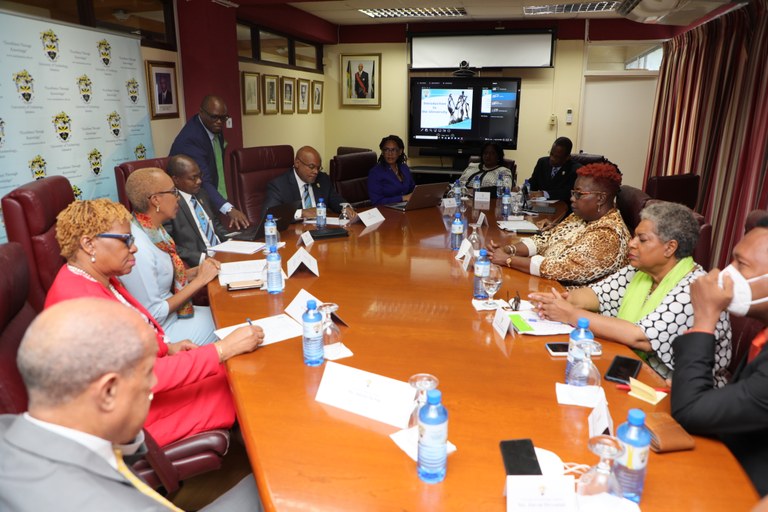 Chancellor’s meeting with members of the University’s Executive Management team, along with Hon. Fayval Williams, MP, Minister of Education, Youth and Information, Mrs. Maureen Dwyer, Permanent Secretary and Mr. Aldrick McNab, member of the Council’s Search and Selection Committee for the Appointment of Chancellor, Ministry of Education, Youth and Information on Thursday, September 29, 2022. 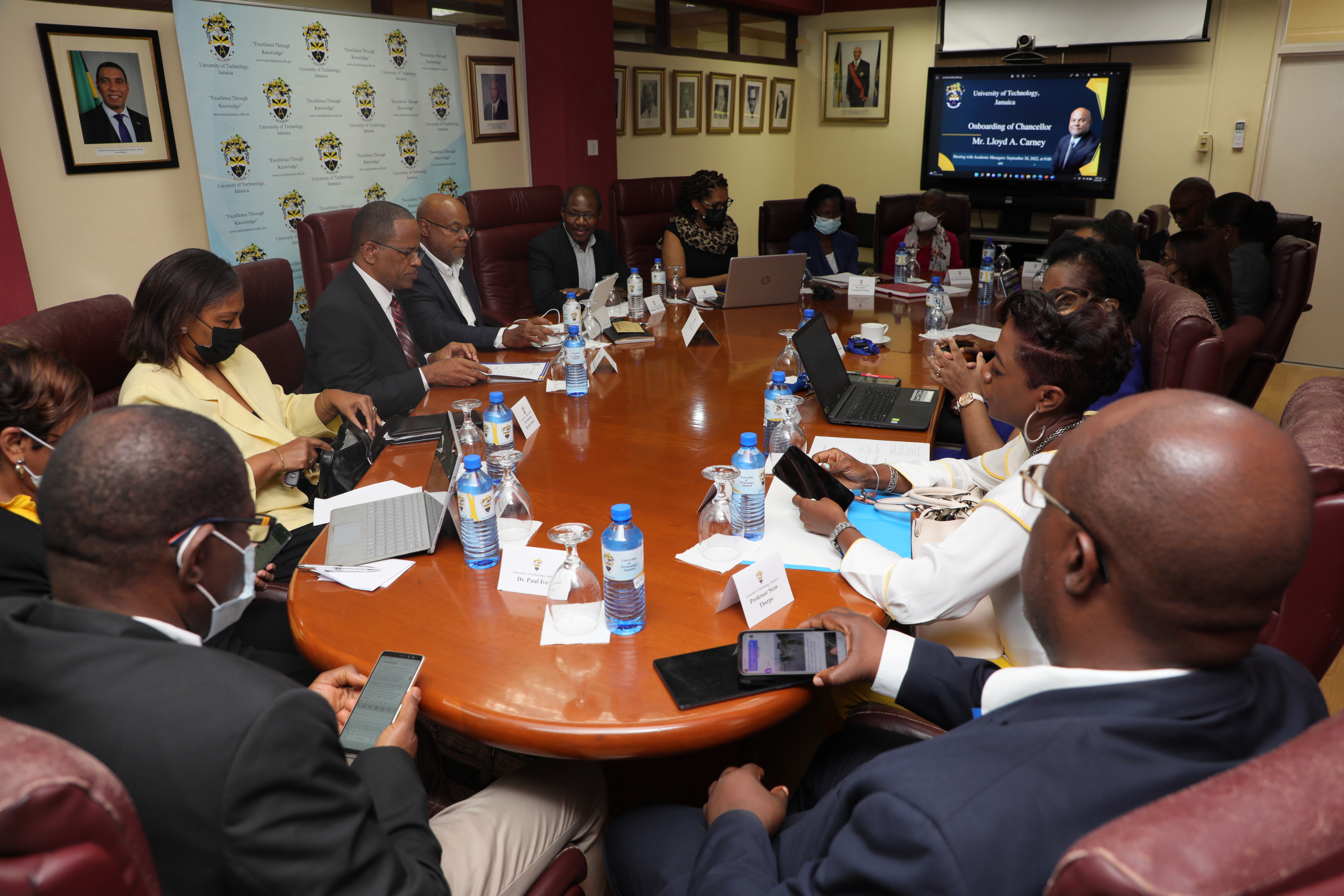 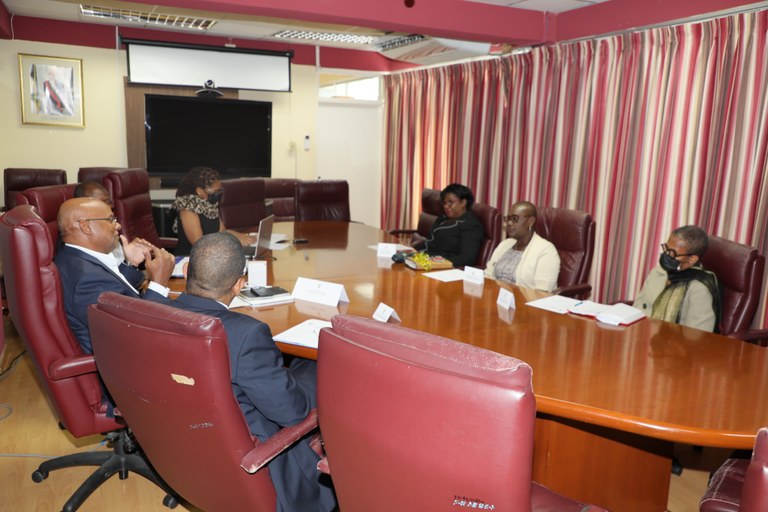 Chancellor’s meetings with members of Academic Management comprising Deans and Associate Vice Presidents (top) and with members of the three Staff Unions (bottom) on Friday, September 29, 2022. 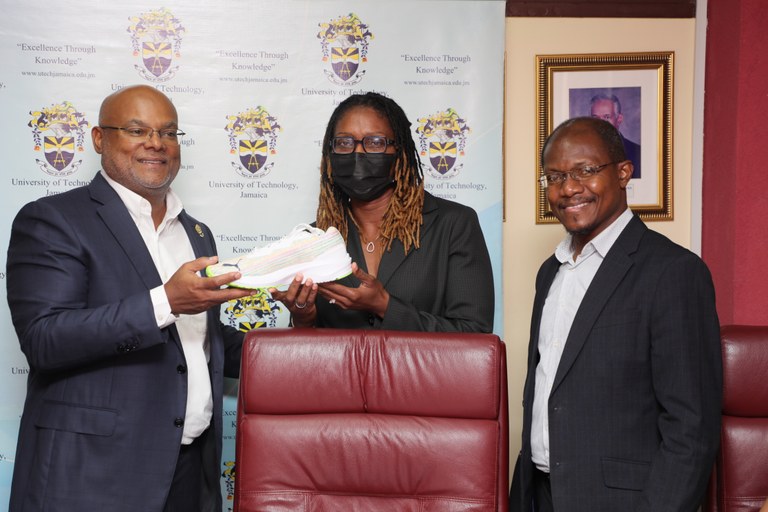 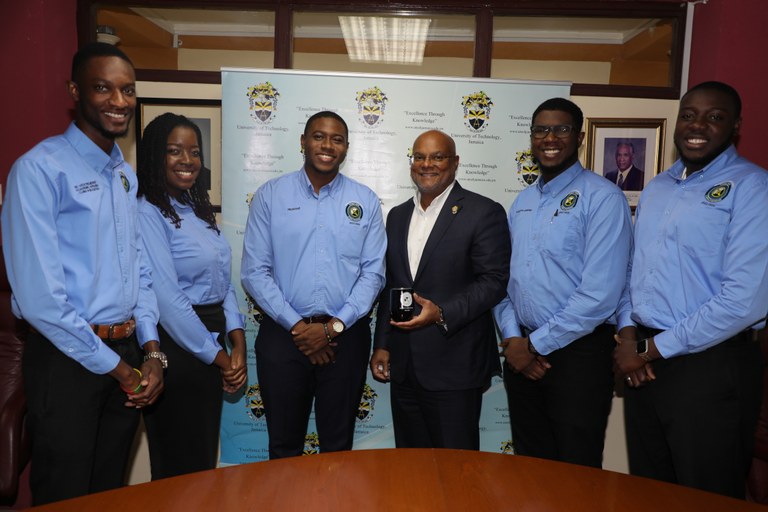 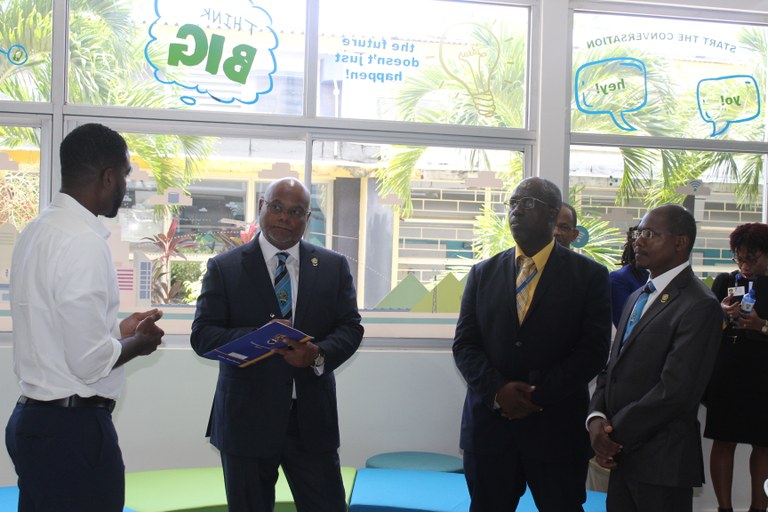 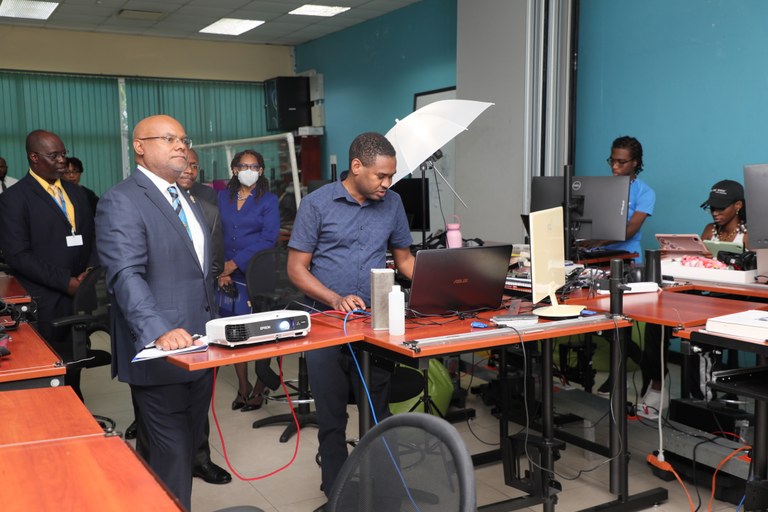 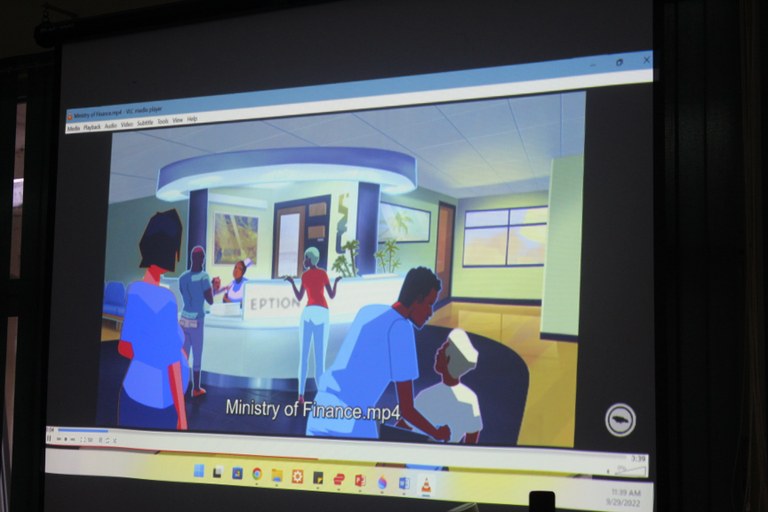 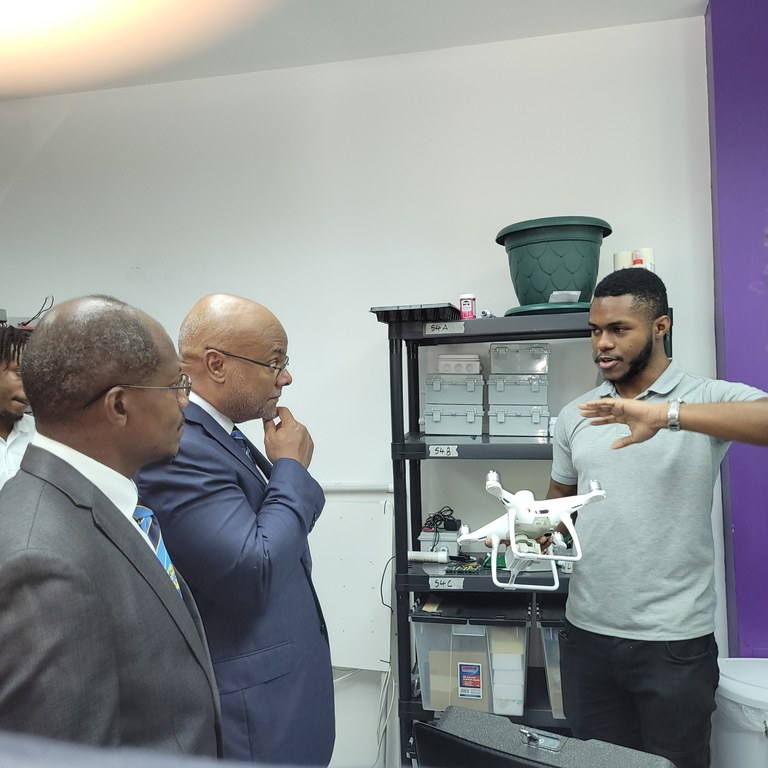 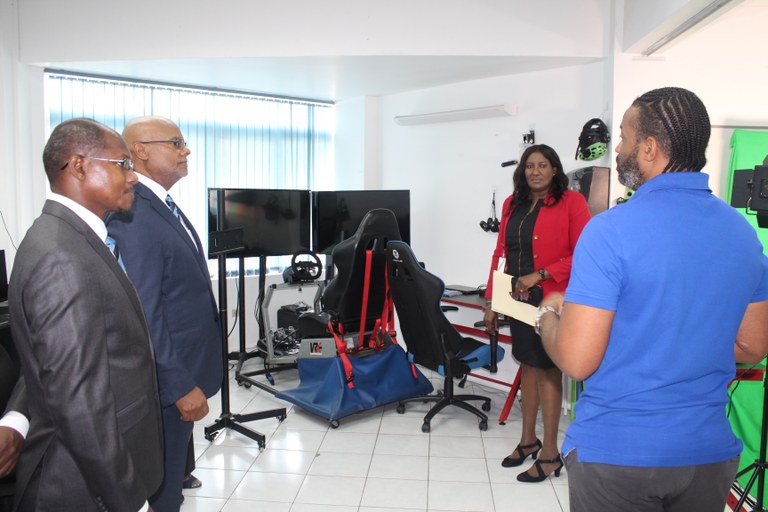 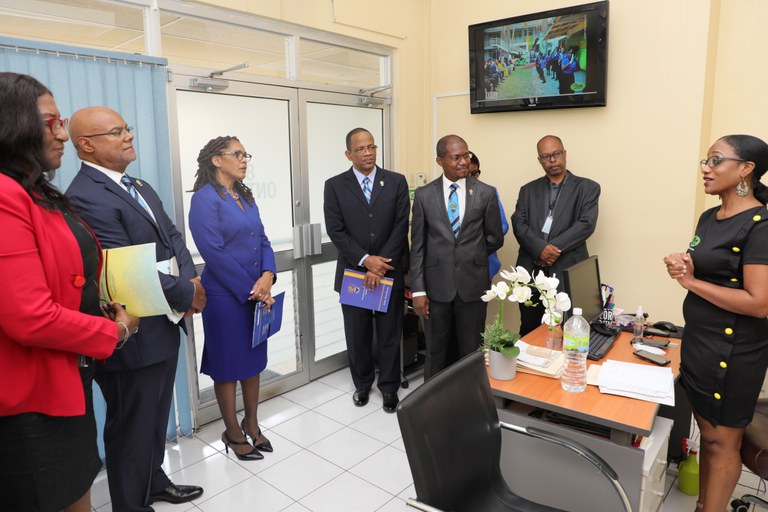 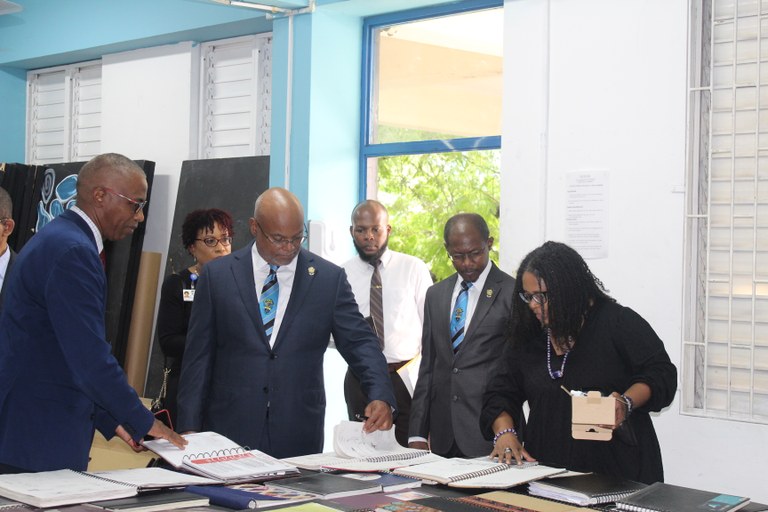 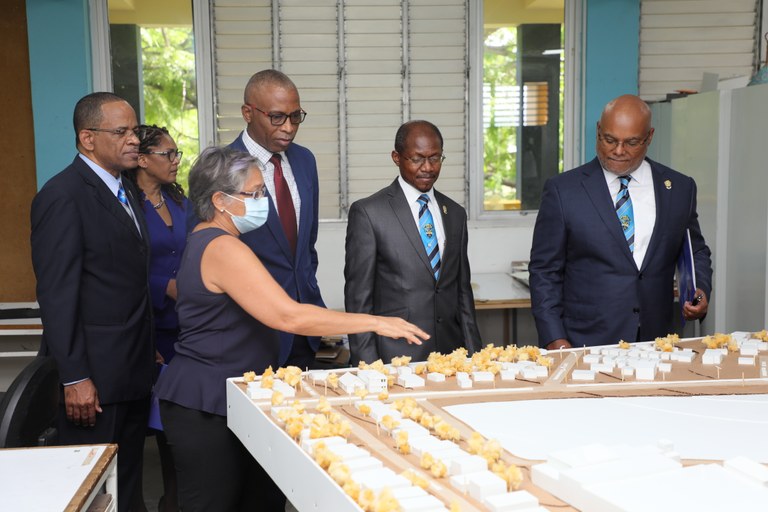 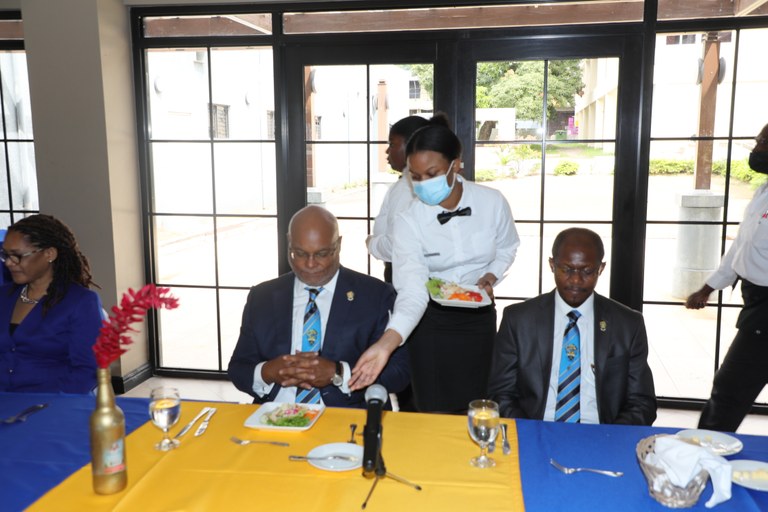 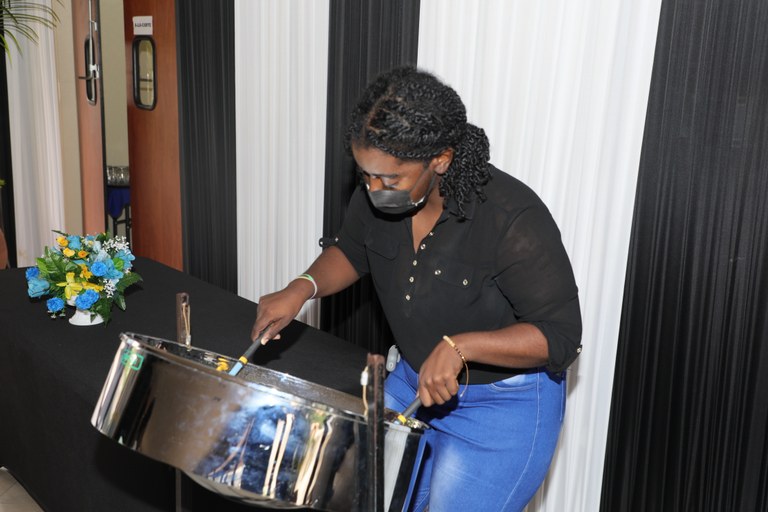 On both days of his visit, Chancellor, Mr. Lloyd Carney and members of the leadership team enjoyed a la carte dining at lunch, expertly curated by the School of Hospitality and Tourism Management team and served by SHTM students in training. Live entertainment was also provided by the UTech, Jamaica Steel Band.

“I am here to serve” – Chancellor 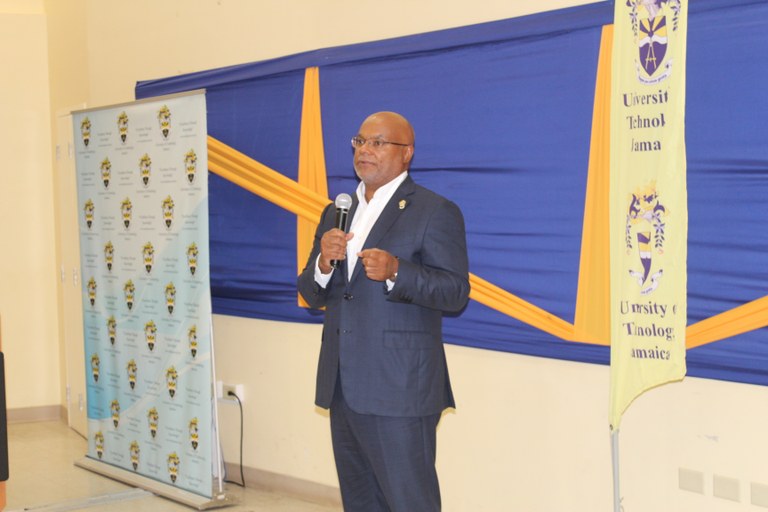 Chancellor Lloyd Carney addresses members of the University Community at a Town Hall meeting hosting at the University’s Shared Facilities Building and via YouTube.

A Town Hall meeting culminated the Chancellor’s two-day visit, and marked his formal introduction to the wider University Community. Professor Colin Gyles, CD, Acting President, UTech, Jamaica in his introduction of the new Chancellor, expressed that “UTech, Jamaica is pleased to have someone of the international eminence of Mr. Lloyd Carney, who has accepted the call to expand his vast body of service and contribution to development in Jamaica.” A Jamaican by birth, Mr. Carney attended Wolmer’s Boys High School and holds a Bachelor of Science Degree in Electrical Engineering Technology and a Master of Science degree in Applied Business Management from Lesley College in Cambridge, Massachusetts. He has also been awarded an Honorary Doctorate from the Wentworth Institute of Technology.

Professor Gyles also elaborated on Mr. Carney’s notable career highlights at some of the leading companies such as Carney Technology Acquisition Corp II (CTAC II), Brocade Communications Systems, Xsigo Systems, Micromuse Inc. and Nortel Networks, as well as the Chancellor’s philanthropic efforts in Jamaica, South Africa and Haiti. In addition to his work as a IT engineer, entrepreneur and venture capitalist, Mr. Carney also serves on several boards including Visa, Vertex and GRID Dynamics.

The Acting President pointed to the Chancellor’s expressed interest in learning about the “thrust for growth and development at our University,” adding that “we look forward to working closely with you in building synergies and tapping into linkages that align with advancing UTech, Jamaica’s Mission to positively impact Jamaica, the wider Caribbean and beyond.”

In his response, Mr. Carney expressed his pride at being appointed Chancellor of UTech, Jamaica, noting that “I was frankly thrilled at this opportunity. It was more than I dreamed I could be able to do at this stage of my life.” In expressing his interpretation of his role as the University’s Chancellor, Mr. Carney underscored his desire to serve, elaborating on his plans to be an “advocate” for UTech, Jamaica in the public sphere, particularly to the Jamaican Government.

“A part of my job is to be a conduit back into the (Government) administration to help position you the best way possible,” he asserted, emphasizing the importance of highlighting the immense contribution that UTech, Jamaica makes to the country’s workforce. In expressing the importance of the University, Mr. Carney noted that “what we do here is the most important job in the world. There is no more important task than to take a young mind and to influence that young mind to be a constructive member of society.” He spoke to the calibre and quality of UTech, Jamaica graduates, relating his own personal experience with the excellent test scores of engineers hired for a branch of one of his companies recently opened in Kingston.

The Chancellor, who sits on the board of the University of California, San Francisco, and the Wentworth Institute, indicated that “I am bringing to bear the experience I have from working at other universities, as well as from industry and trying to meld that all together.”

He also outlined plans for a return to visit the University’s academic and administrative units to further acquaint himself with the functions and capacities of the various areas of the University Community.